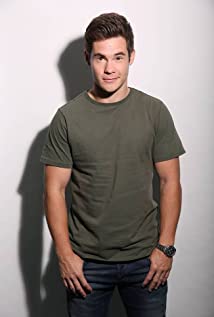 Adam Patrick Devine is an American actor, comedian, singer, screenwriter, and producer. He is one of the stars and co-creators of the Comedy Central comedy television series Workaholics and Adam Devine's House Party. He played the role of Bumper in the musical films Pitch Perfect and Pitch Perfect 2. He had recurring sitcom roles as Andy Bailey in Modern Family and Adam DeMamp in Workaholics. He also had roles in the films The Intern, The Final Girls, Mike and Dave Need Wedding Dates, Game Over, Man! and When We First Met. He has voiced characters in films including Ice Age: Collision Course and The Lego Batman Movie, as well as in the animated series Uncle Grandpa, Penn Zero: Part-Time Hero, Vampirina, Green Eggs and Ham, and Bad Ideas with Adam Devine.