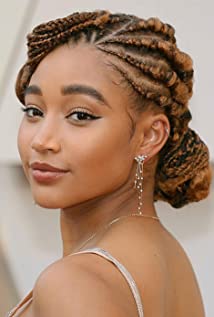 Named for the Zulu and Xhosa word for "power," Amandla was born in Los Angeles, California, to Karen Brailsford, a writer, and Tom Stenberg, a businessman. Her mother is African-American and her father is Danish (and of part Inuit-Greenlandic ancestry).In the summer and fall of 2010, she shot her first feature, Colombiana (2011), an action-thriller starring Zoe Saldana whose character, the avenging assassin Cataleya Restrepo, Amandla plays as a child. In April 2011, Lionsgate announced that Amandla had landed the role of Rue in the screen adaptation of Suzanne Collins' popular young adult series, The Hunger Games (2012). For her heart-breaking performance, Amandla earned an NAACP Image Award nomination for Outstanding Supporting Actress in a Motion Picture. She also won (with Jennifer Lawrence) a Teen Choice Award for Choice Movie Chemistry.Amandla starred in the recurring role of Macey, the daughter of Captain Frank Irving (Orlando Jones), on season one of Fox's Sleepy Hollow (2013). In the summer of 2015, Amandla played series regular Halle Foster on Mr. Robinson (2015) opposite Craig Robinson. She made her Sundance Film Festival debut with the teen angst drama As You Are (2016) which won a Special Jury prize. Amandla appears in several sequences in the visual album Lemonade (2016). In March 2016 Fox 2000 won a heated bidding war for Angela Thomas' debut novel, The Hate U Give (2018) with Amandla attached to star. The actor also nabbed lead roles in the YA adaptation Everything, Everything (2017); the Amma Asante World War II drama, Where Hands Touch (2018); and in the film adaptation of The Darkest Minds (2018) series by Alexandra Bracken.In May 2019 it was announced that Amandla would appear in the Netflix series The Eddy (2020) opposite André Holland (Moonlight (2016)). Damien Chazelle serves as executive producer of the Paris-set show.In addition to on-camera jobs, Amandla put her sensitive ear to work in voice-over gigs for both film and television. She lent her voice to Rio 2 (2014) in the role of Bia, a high-flying feathery spawn of Blu (Jesse Eisenberg) and Jewel (Anne Hathaway). A gifted musician, Amandla plays the violin, drums and guitar. In 2013 she began performing on the violin and singing harmonies at LA venues with singer/songwriter Zander Hawley. The folk-rock duo, known as Honeywater, released their first EP in August 2015 and a second in November 2016. Amandla's cover of Mac DeMarco's "Let My Baby Stay" is featured on the Everything, Everything soundtrack and in the closing credits. She appears in and directed the accompanying video. For the soundtrack of The Hate U Give (2018) Amandla wrote and sings "Always."When she's not making music, Amandla is making noise on social media. She was declared "one of the most incendiary voices of her generation" by Dazed magazine, which featured Amandla on the cover of its Autumn 2015 issue. Amandla helped catapult the topic of cultural appropriation into public discourse when she posted her school project video, "Don't Cash Crop My Cornrows," onto her Tumblr in 2014. Oprah Winfrey took note of her activism and invited Amandla to give a talk ("My Authenticity Is My Activism") for SuperSoul Sessions Series 2 at UCLA's Royce Hall in April 2016. Highlights were featured on Super Soul Sunday (2011). "Black Girls Rock!" (2016)_ Inc honored Amandla with the Young, Gifted and Black award and she is also the winner of the "BET Awards 2016" (2016)_ YoungStars award. The Ms. Foundation for Women named Amandla, along with Rowan Blanchard "Feminist Celebrity of the Year" in 2016.In 2016, the young actor-activist came out as non-binary on her Tumblr blog.The actor-activist landed a spot on Time magazine's list of the 30 Most Influential Teens in 2015 and 2016; was declared one of W Magazine's Royals in 2017; and was the featured call-out in Forbes 30 Under 30, also in 2017. Amandla made her American magazine cover debut with Teen Vogue's February 2016 issue for which she co-directed a trio of videos about black women. For her second Teen Vogue cover - the Icons issue in September 2017 - Amandla wrote and directed a meditation video. Time magazine put her on its cover in 2018, making her a Next Generation Leader honoree.With Stranger Comics' Sebastian Jones, Amandla wrote the comic books "Niobe: She is Life" and "Niobe: She is Death." An ambassador for No Kid Hungry, Amandla also supports the Ubuntu Education Fund, which nurtures children "from cradle to career" in Port Elizabeth, South Africa.

My Name Is Andrea