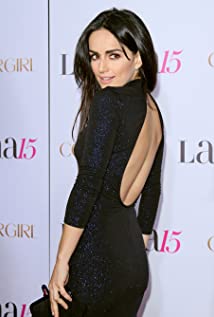 Ana de la Reguera grew up in the tropical state of Veracruz, on the Gulf Coast of Mexico. She began her performance arts studies in the Cultural Institute of Veracruz, then left for Televisa's Center for Artistic Education (CEA) and TV Aztecas' artistic institute (CEFAC) in Mexico City, later taking study with Lisa Robertson and Aaron Spicer in Los Angeles and acting coach Juan 'Carlos Corzza in Spain. In theatre she participated in "El Cartero" ("Il Postino") for which she received two awards: one for "Best Actress" from the Association of Theatre Journalists in Mexico and the other for the year's "Most Promising Actress" from the Association of Theatre Critics and Journalists.De la Reguera's professional career began with her role in the telenovela Azul (1996), followed by Pueblo chico, infierno grande (1997)--for which she received the Heraldo Award for "Best Breakout Female Actress"--and Desencuentro (1997), which was her third telenovela under the direction of the internationally recognized Ernesto Alonso. _"Tentaciones" (1998)_ marked her beginning with powerhouse Argos Comunicación. She was immediately offered roles in _"Destino" (1998)_ and Todo por amor (2000), for which she received "The Golden Palm Award." After that, it was non-stop work for de la Reguera. In 2002 she starred in Cara o Cruz (2001), which was the first telenovela co-produced by Argos Comunicación and Telemundo, made exclusively for the Hispanic audience living in the US. The following year she played María in the telenovela Por tí (2002) for TV Azteca and the mini-series that followed up on Pedro el escamoso (2001), Como Pedro por su casa (2003), which was a co-production between Colombia's Caracol and Telemundo. Additionally, de la Reguera also had the lead role in the Peruvian soap opera Luciana y Nicolás (2003).De la Reguera's introduction into film began with Dust to Dust (2000), which earned her two nominations: "El Heraldo de la Revelación Femenina" (Best New Actress) and "Eres Mejor Actriz" (Best Actress). Later she acted in A Beautiful Secret (2002) with Oscar nominee Katy Jurado. In 2003 Ana starred in the highly acclaimed comedy Ladies' Night (2003), alongside Ana Claudia Talancón. The movie became the box-office success of the year and won her three major awards: "the Latin America MTV's Favorite Actress Award," the Mexican movie industry Award for Best Actress of the year, "CANACINE," and the "Diosa de Plata (Silver Godess) Award" for Best Supporting Actress (2003).In 2005 she played the starring role in Gitanas (2004), which aired on Telemundo in the US and now has been seen as far away as Ukraine, Spain and Argentina. In 2006 de la Reguera had the lead in the powerful On the Edge (2006), which earned her her second "Diosa de Plata [Silver Goddess] Award" for best actress. In addition, she also starred in Paraiso Travel (2008), playing the role of Milagros, singing and dancing for the first time in a movie. John Leguizamo and Colombian star Margarita Rosa de Francisco were also in the cast. The film was shown at the Tribeca Film Festival and later released throughout the US and Latin America. That same year Ana received her big break into American cinema when she landed the role of Sister Encarnación in the comedy Nacho Libre (2006). The film by Jared Hess--director of Napoleon Dynamite (2004)--and co-starring Jack Black gave her the opportunity to be seen around the world.In 2008 she became the new face for Cover Girl worldwide, alongside celebrities like Drew Barrymore, Queen Latifah, Ellen DeGeneres and Rihanna. From there her career springboarded into many other impressive endorsements, including campaigns with Pantene, Special K and Flip, Macy's, Coca-Cola (Ciel), Pepsi (Be Light) and Caress, among many others. She began 2010 with a worldwide publicity campaign for Lipton Tea alongside actor Hugh Jackman. Most recently, she did an international campaign with Kahlúa benefiting her hometown of Veracruz, Mexico, left demolished after the resent destruction of Huricaine Karl.In the action-thriller film Sultanes del Sur (2007), filmed mainly in Argentina, she plays Monica Silvari, a mean and sophisticated bank robber alongside Spanish actors Jordi Mollà and Tony Dalton. In the spring of 2008 Ana began filming Capadocia (2008), an HBO mega-production TV show about the chaotic and miserable life in a women's prison in Mexico. The show aired with record-breaking ratings in Mexico and Latin America, and was released in the US in the fall of 2008 for HBO OLE. Three of the most recognized directors in Latin America participated in this HBO original production: Epigmenio Ibarra, Jorge Aragón and Luis Peraza. The successful series got three International Emmy nominations for its first season, and this fall marked the opening of "Capadocia"'s second season.In 2009 she shot _Di Di Hollywood (2009)_, from famed _Jamón, Jamón (2000)_ director Bigas Luna. That same year she went back to the Mexican theatre for six m