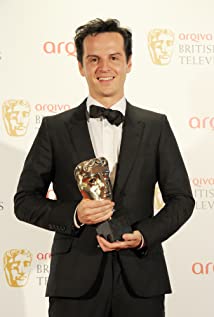 Andrew Scott was born in Dublin, Ireland, the middle child with two sisters, Sarah and Hannah. His parents, Jim and Nora, sent him to a private Catholic school for boys. He did a little acting as a child when he was in a couple of commercials on Irish TV. At 17 he was chosen to star in his first professional role in the Irish film Korea (1995).Scott attended Trinity College in Dublin for six months then dropped out to pursue acting full-time. He was cast in several plays at the Abbey Theatre, the national theater of Ireland. Later, Scott moved to London for a supporting role in Longitude, a television movie starring Michael Gambon. He has stated that he felt uncomfortable and shamed as a gay man in his native country and that was one of the reasons he wanted to move to England where the atmosphere was more welcoming. He mentioned that he had a girlfriend in Dublin in a 2000 newspaper interview, however.Occasional film and television work in Britain, Ireland and America interspersed his busy stage career. Most notable of these were American mini-series Band of Brothers and John Adams, and the British television comedy series, My Life in Film. He has won many awards for his work in theater in Ireland and England, and received a nomination for The Vertical Hour on Broadway.When Scott gained international notice as Moriarty, detective Sherlock Holmes' nemesis in Sherlock on BBC TV, his film and television career stepped up considerably with roles in several movies including Victor Frankenstein with James McAvoy and Daniel Radcliffe which was a clunker with the critics, and Spectre, the usual 007 box office smash that was nevertheless considered a weak James Bond entry. In 2017 Scott realized a long-held ambition when he starred as Hamlet in a widely acclaimed performance on the stage in London.On a personal level, Scott revealed to the Times of London newspaper in 2019 that he and his partner of 15+ years, former actor turned screenwriter of Scott's film, Pride, Stephen Beresford, were no longer a couple.In 2019 Scott's star took an international upswing when he played the part of the Priest in the second season of the critically lauded British comedy, Fleabag. The popularity of his character as the forbidden love interest of the title character resonated strongly with mostly female audiences in the UK and the United States via internet mania dubbing him the "hot priest" as the character, Fleabag, played by the show's star, creator and writer, Phoebe Waller-Bridge, called him in the show.