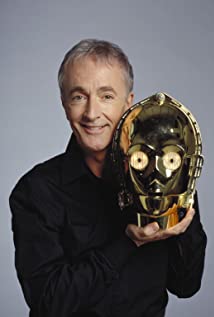 Initially not a science fiction fan, theatre actor Anthony Daniels was persuaded by his agent to meet George Lucas for the casting of C-3PO in Star Wars: Episode IV - A New Hope (1977). He went on to perform the character, both his voice and body in the suit, for all the episodic Star Wars films produced. Additionally, he performed the voice of the character for the radio serial based on the original trilogy and the animated series Star Wars: Droids - The Adventures of R2D2 and C3PO (1985), Star Wars: Clone Wars (2003), Star Wars: The Clone Wars (2008), related series Star Wars: The Clone Wars (2008) and Star Wars Rebels (2014).For Star Wars: Episode I - The Phantom Menace (1999), he wore a blue Spandex suit, as the android is incomplete in the film and ultimately produced in CGI. In addition to playing the golden droid, he appeared in a live action cameo in the nightclub scene of Star Wars: Episode II - Attack of the Clones (2002) and opera scene in Star Wars: Episode III - Revenge of the Sith (2005). As C-3PO, he played a small role in Rogue One: A Star Wars Story (2016) and The Lego Movie (2014).