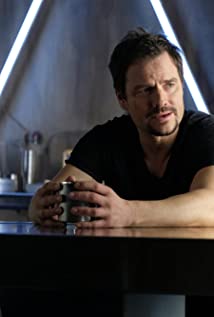 Anthony Lemke is best known for portraying "Three" (Marcus Boone) on Syfy's action-drama Dark Matter.Lemke was born in Ottawa, Canada and studied theatre at the University of Waterloo in Waterloo, Canada, Ontario. In 2000, he landed his first series regular role as the mercenary "Marcus Grisham" in USA Network's fantasy-genre series The Queen of Swords, which Variety Magazine declared a "guilty pleasure". He also played "James Murphy", the son of Alex Murphy (aka RoboCop), in RoboCop: Prime Directives, a four-part mini-series that aired in 2001.Lemke then enrolled in law school at the McGill University Faculty of Law in Montreal, while continuing his career as an actor, nabbing regular and recurring roles, on TV productions shot in Montreal and Toronto, including playing co-lead opposite Lea Thompson in A Life Interrupted, which was nominated for Best TV Movie at the 2008 Gemini Awards.Since returning full time to acting after law school, Lemke has a deep collection of credits to his name in both English and French. In 2008 he joined the cast of Radio Canada's comedy-drama Les Hauts et les bas de Sophie Paquin, playing "David Rothstein", a character that Montreal newspaper La Presse numbers among the few anglophone characters to ever "mark the soul" of Quebecers. He followed up in French with recurring roles on Mémoires Vives, Mirador, Nouvelle Adresse, all of which are Gémeaux Award nominated TV series.In 2011, he joined the casts SpikeTV's cult college classic Blue Mountain State and Syfy's Lost Girl and for multiple-episode arcs. In the same year, Lemke took on a lead role in the movie Rouge Sang, where he played a vulgar, charismatic British soldier decamped in the home of a French settler; the film garnered 3 Canadian Screen Award nominations.In 2014, Lemke reprised his role of "Brian Becker" for the fifth season of CTV and Fox International's The Listener, a role he had played during season one . Lemke also began a multiple episode run over two seasons as "Dan Malloy" on CTV and Bravo's acclaimed cop-drama 19-2. The series received 10 Canadian Screen Award nominations, including best dramatic series. Also in 2014, Lemke was cast in the role of "Three" (aka. Marcus Boone) in the sci-fi television series Dark Matter on Syfy in the US and in over 100 countries worldwide. The series shot 39 episodes over three seasons from 2015-2017. Lemke appeared as a series regular in all 39 episodes.