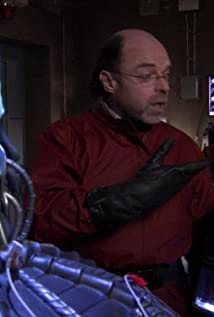 Bill Dow is an award-winning actor and director (and occasional writer) in theatre, film, and television, with scores of credits over a long and varied career. Currently appearing in two hit television series, Bill Dow is a versatile and sought after performer.As Dr. Lee on Stargate SG-1 (1997), he is the passionate, though sometimes slightly befuddled man of science who does his best to assist the warriors of Stargate Command; while on Da Vinci's Inquest (1998), the award-winning Canadian Drama, he plays Russ Hathaway, the mayor of Vancouver. These are just the latest in a long line of characters created for television series that range from sci-fi (Charles [Chuck] Burks, Agent Mulder's old college chum who dabbles in science and the occult on The X-Files (1993)), to prime time drama (Mr. Parkman, the teacher on Pasadena (2001)), to comedy (Bob Fraser, the owner and bartender of "The Fraser Arms" on Nothing Too Good for a Cowboy (1998)). Bill Dow has played many other guest star and recurring roles in a variety of television series, Movies of the Week, and feature films, notably: Legends of the Fall (1994), Mr. Magoo (1997), Andre (1994), and Absolute Zero (2006).In the theatre, Dow has directed several award winning productions for the Vancouver Playhouse (where he was Artistic Associate for many years) including an innovative and moving production of John Steinbeck's Of Mice and Men; he has performed many lead roles, including David Mamet's Oleanna, and most recently a Jessie award-winning performance as Martin Dysart in Peter Shaffer's Equus. His short film, The Alley, was nominated for several awards and invited to the international short film festival in Siena, Italy.Dow is completing his M.A. in Liberal Studies at Simon Fraser University.