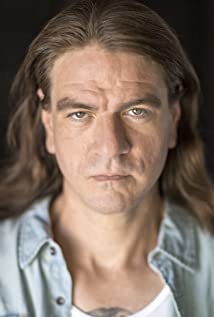 Charles Halford was born on February 28, 1980 in Salt Lake City, Utah. He is an actor, known for True Detective (2014), Constantine (2014), and Logan Lucky (2017), as a voice actor he is known for The Death and Return of Superman (2019), Tangled: The Series (2017), and Rise of the Tomb Raider (2015). He moved to Los Angeles in 2009.The youngest of four children, Charles often commanded attention, usually by acting out. Eventually this would bring praise and direction to an otherwise distracted and complicated young man, but not before overcoming some significant challenges. Always one of the tallest in the class, it was assumed he should play sport. The writer uses 'assumed,' because there wasn't great communication between he and his parents in his youth. Sport, however, was far more violent and competitive than the large framed boy preferred, and filled with attitudes and machismo which Charles found repellent and annoying. He also took an early liking to stimulants such as soda and cigarettes which didn't agree with running and jumping, these preferences and proclivities led him to rock and roll and heavy metal, not the other way around. Charles got an electric guitar for his 11th birthday and was hopeful to become an adolescent rockstar like his older brother who had a cool high school rock band. So Charles started a band named "Tablature," which consisted of only him and his friend, fellow "tall kid" and "a great drummer for his age," Christopher Mosier. The duo basically practiced Def Leppard covers from a 'Hysteria' songbook of, you guessed it, tablature. Def Leppard was Chris' favorite band, and it was his songbook. Christopher was tragically and brutally murdered during the first semester of their 8th grade year. December 30 1993. He was 13. May he live forever elevated somehow in this, his one bandmate's eventual IMDB bio. The 'Hysteria' songbook is buried with Chris in Murray Cemetery, in SLC with under a headstone depicting a drum set, the dates are way too close together. RIP Chris. After this tragedy, Charles did not like 'radio / rock music' for a long time, instead he leaned heavier into detrimental substances, and musical tastes attitudes; dark/death metal first, on to underground hip-hop and skateboarding, then punk music, always cultivating some particular troubles for himself and his parents and teachers ... He was carrying an abysmal GPA and hundreds of unexcused absences by the time he was allowed to take a drama class in his 8th grade year. Second semester 1994. He got an A. A huge achievement. The following year he got himself away from the detrimental substances by getting into hardcore music and the Straight Edge subculture. A music scene, derivative of punk that abstain from drugs, alcohol, and promiscuous sex, and at the time, many members of this subculture were exploring and promoting veganism and animal rights, both topics and traditions that Halford still abides by and supports. However, not unlike sports, again, Charles would find the Salt Lake straight edge 'scene' in Salt Lake too violent, competitive, attitudinal and machismo for him and his experiences and sympathies. It was around this time that Charles would start dabbling in film making with some buddies and camcorders; mostly skateboarding videos, usually with some ridiculously adolescent and, as such, likely offensive materials and narrative. Charles would then have the good luck to go to Cottonwood High School, a school with a very impressive theater department and facility. It was at Cottonwood HS where Charles learned to be competitive, in drama contests, by acting attitudes of violence, and machismo. This led to a full-ride scholarship to college for theater, which eventually would lead to dropping out to more deliberately pursuing film work while maintaining some presence in the music that helps grow him up and get him straight. The music projects eventually lost out the the acting work. The rest is sorta history. At one point, around 2009, in order to raise money to move to LA, because "It was time, I had a hot new Disney Channel Original Movie coming out called 'Dadnapped' in which I was one full half of 'the dadnapping duo,' this was a big deal at the time.." He sold a 35 oil paintings of himself "as characters played in Utah films," he made about $2500, do the math, he's clearly a great painter too... Or salesman... Or actor..?Charles credits working as semi-regular cast for The Sundance Institute Directing Lab as his most profound and relevant professional training. It was at these labs where Charles would meet and work with some of the hottest up-and-coming directors of the 21st century, some of whom have collaborated with Charles professionally since working together at the labs. One of these instances culminated in the small but outstanding, and deeply unsettling, role of Reggie Ledoux, in Season One of True Detective (2014) the gas-mask wearing, machete carrying boogeyman of "black stars, "flat circles