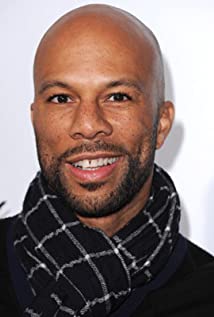 First known as a rapper who became one of the more prominent voices in hip-hop's new millennium renaissance, Common later transitioned into acting. He was born in Chicago, and is the son of educator Dr. Mahalia Ann Hines and Lonnie Lynn, an ABA basketball player turned youth counselor.On October 6, 1992, Common released his first LP, "Can I Borrow A Dollar?" under the Common Sense moniker. Tracks like "Charm's Alarm" and "Breaker 1-9" established him as a lyricist with wit, street-smarts, and love for extended similes, while tracks like "Heidi Hoe" would touch on the misogyny that would surface sparingly on future work.In 1994 he released "Resurrection", notable for the smooth 'Large Professor' produced title cut as well as "I Used To Love H.E.R.", an ode to hip-hop. This album further increased his underground reputation while giving the hip-hop nation a new solid conscientious voice in a year that was excellent for underground artists (Nas, Jeru The Damaja, Digable Planet, et al.)After a name change brought on by a lawsuit, Common reemerged in 1997 with "One Day It'll All Make Sense". With guests ranging from Erykah Badu to Canibus to De La Soul and production help from mainstays No I.D. and Dug Infinite, the album had a distinctly underground flair. His big mainstream breakthrough album was yet to come.After an appearance on The Roots smash 1999 album, "Things Fall Apart," Common moved to MCA Records. He soon was in the studio collaborating with the Okayplayer collective and with help from the forward-thinking production troupe Questlove (aka Questlove), James 'Jay Dee' Yancey, James Poyser, et al), he released his fourth album, "Like Water For Chocolate" in the spring of 2000. With its varied sonic plateau (Afrobeat, funk, and old-school soul) it was much different from previous outings. On the strength of tracks like the 'DJ Premier' produced banger "The 6th Sense", the album was a success, becoming a worthy addition to "The Next Movement".In 2003 he released "Electric Circus". The album, a hip-hop/funk/soul/rock/psychedelia hybrid, polarized hip-hop fans like no other album has in recent memory. Common has also chosen to redefine himself, swearing off the alcohol, marijuana, and fornication that he had once indulged in.Also in 2003 he appeared in a TV sitcom episode. With only a couple minor roles between 2003 and 2004, in January of 2007 he made his big screen debut.