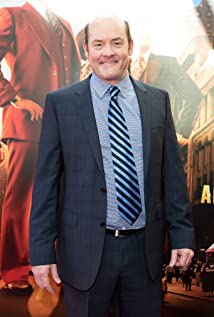 Actor, writer and producer David Michael Koechner was born in Tipton, Missouri, to Margaret Ann (Downey) and Cecil Stephen Koechner, who ran a turkey coop manufacturing business. He is of German, Irish, and English ancestry. An alumnus of Chicago's Second City Theater, Koechner got his first break as a cast member on "Saturday Night Live" and since has become an instantly recognizable face appearing in more than 120 films and television shows. He is best known for his roles as Todd Packer on "The Office" and Champ Kind from "Anchorman" and "Anchorman 2: The Legend Continues." Koechner received rave reviews for his role in the dark, twisted and film festival award-winning thriller "Cheap Thrills." He is also writing and producing a variety show pilot for NBC. Additional notable film credits include "Waiting," "Out Cold," "Talladega Nights," "Get Smart," "Extract," "Thank You for Smoking" and "A Haunted House." When not filming, Koechner performs live stand-up comedy across the country and creates original content videos for his YouTube channel, Full On Koechner. He resides in Los Angeles, Calif. with his wife and five children.

Diamond in the Rough

The Bitch Who Stole Christmas