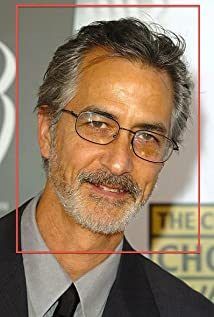 David Russell Strathairn was born on January 26, 1949 in San Francisco, California. He is the son of Mary Frances (Frazier), a nurse, and Thomas Scott Strathairn, Jr., a physician. He has two siblings, Tom and Anne. His ancestry includes English, Scottish, Irish, Portuguese, Hawaiian, and one sixteenth Chinese (the latter three from his paternal grandmother).Strathairn attended Williams College, where he demonstrated great interest in the theatre, and first befriended John Sayles, with whom he would later frequently collaborate. Strathairn graduated college and traveled to Florida to visit with his grandfather, but the grandfather died while Strathairn was en route. Strathairn, finding himself freshly arrived and without friends in Florida, decided instead to join the Ringling Brothers Clown College and subsequently worked as a clown for six months in a traveling circus.Relocating to New York State, he spent several years hitch-hiking across America to work in local theaters during the summers. During one of these summers Strathairn reunited with Sayles, and this eventually resulted in his role in the highly regarded Return of the Secaucus Seven (1980), Sayles' directorial debut. Thereafter Strathairn developed an extensive resume of supporting roles, which became increasingly substantial as his stature in the industry grew; notable films include Lovesick (1983), Silkwood (1983), L.A. Confidential (1997), and A Map of the World (1999). Sayles frequently casts Strathairn, whose performances can be seen in Sayles' The Brother from Another Planet (1984), Matewan (1987), Eight Men Out (1988), City of Hope (1991), and Passion Fish (1992). Perhaps most notable of his collaborations with Sayles is his superb performance co-starring with Mary Elizabeth Mastrantonio in Limbo (1999).After a string of successful supporting roles in the early 2000s, Strathairn found himself thrust into the role of leading man with his performance as Edward R. Murrow in George Clooney's Good Night, and Good Luck. (2005) Taking on the role of the iconic newsman in the black-and-white drama, Strathairn garnered numerous award mentions including an Academy Award nomination for Best Actor. Following the success of that film, Strathairn traveled easily between low-budget independent films - The Notorious Bettie Page (2005), The Sensation of Sight (2006), My Blueberry Nights (2007), and Howl (2010) among them - and big-budget Hollywood productions, including We Are Marshall (2006), The Spiderwick Chronicles (2008), both The Bourne Ultimatum (2007) and The Bourne Legacy (2012), and Steven Spielberg's biopic Lincoln (2012), in which he plays Secretary of State William Seward.Strathairn has also worked extensively in television, and first became familiar to television viewers as the title character's boss in the series The Days and Nights of Molly Dodd (1987). In addition to narration work for many PBS shows, Strathairn has appeared in the TV series Big Apple (2001), The Sopranos (1999), Monk (2002), and headed the cast of the science-fiction series Alphas (2011). His work in television films has brought him an Emmy Award for Temple Grandin (2010) and an Emmy nominations for Hemingway & Gellhorn (2012).Strathairn married nurse Logan Goodman in 1980, and the couple have two children.

The Devil Has a Name

An Interview with God

My Dinner with Hervé