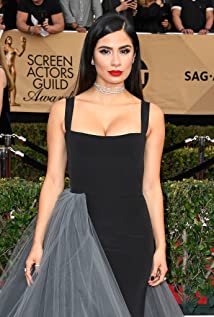 Diane Guerrero (born July 21, 1986) is an American actress. She is best known for her roles as Maritza Ramos on the Netflix series Orange Is the New Black and Lina on Jane the Virgin. Among her other roles was a recurring role on Are We There Yet? Guerrero grew up in Boston and remained there after the rest of her family was deported to Colombia. She is an advocate for immigration reform. Her role on Orange Is the New Black has twice contributed to wins for the Screen Actors Guild Award for Outstanding Performance by an Ensemble in a Comedy Series.Guerrero was born in New Jersey to Colombian parents and raised in Boston, Massachusetts. As the only member of her immediate family with United States citizenship (by virtue of being born in the country), she remained in the U.S. when her parents and older brother were deported back to Colombia when she was 14. Her parents had pursued legal citizenship, but had been fraudulently represented. Guerrero's niece, who also grew up without a strong family support system, later served time in jail.Guerrero was raised in the Jamaica Plain and Roxbury neighborhoods of Boston after being taken in by other Colombian families. She has had an interest in acting since a young age and took advantage of free opportunities in the neighborhood or at school. Then she attended Boston Arts Academy, a performing arts high school, where she was in the music department. Among her high school activities was singing with a jazz group, but she anticipated pursuing political science and communications in college. In 2010, she appeared in the Faces music video that was shot in Norwood, Massachusetts for Louie Bello. Her first job after college was in a law office. At age 24, she decided to pursue a career in acting. In 2011, she moved to New York City and studied acting at the Susan Batson Studios where she met her manager Josh Taylor. Guerrero's life experience compels her to advocate for immigration reform and is an influence that she draws upon in her acting.She auditioned for a role on Devious Maids, but was cast in Orange is the New Black, where she plays a Bronx-bred character that is likely Puerto Rican. For season 2, she was part of the cast that earned recognition for Outstanding Performance by an Ensemble in a Comedy Series at the 21st Screen Actors Guild Awards. The cast earned recognition for Outstanding Performance by an Ensemble in a Comedy Series again at the 22nd Screen Actors Guild Awards. She has had a recurring role on Are We There Yet?.In 2014, she appeared in Emoticon ;), a comedy about a May-December romance in which her character's father is involved with a doctoral candidate. Her performance in this film as Amanda ("Mandy") Nevins, an adopted teenage child, elicited positive criticism such as a description of a "well-drawn smaller moment" that was "beautifully rendered" according to Frank Scheck of The Hollywood Reporter and a performance that "command sympathy" according to Inkoo Kang of the Los Angeles Times.One of her upcoming roles is as an 1800s Cuban confederate spy, loosely based on the life of Loreta Janeta Velazquez, for Peter and John. She was cast in The CW's series Jane the Virgin in a recurring role. In February 2015, Guerrero was cast as the female lead in CBS' television pilot for Super Clyde, but the show was not picked up for series when CBS announced its fall schedule in May. Guerrero has upcoming film roles in Happy Yummy Chicken, Beyond Control and The Godmother.In 2016, Guerrero released In the Country We Love: My Family Divided a memoir about her parents being detained and deported when she was fourteen. The book's written with Michelle Burford and published by Henry Holt and Co.