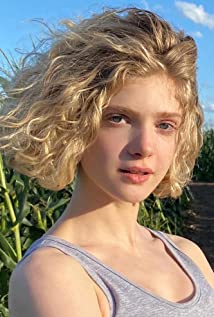 Elena stars in the upcoming Netflix and Lorenzo Di Bonaventura's highly anticipated superhero drama Jupiter's Legacy, based on the graphic novel from Mark Millar's Millarworld. She previously starred as Minnow Bly in Season 1 anthology of the Blumhouse produced Facebook Watch series Sacred Lies, from the executive producers behind Jessica Jones, True Blood and Breaking Bad. She was most recently seen making her Broadway and stage debut starring in the revival of Les Liaisons Dangereuses opposite Liev Schreiber and Janet McTeer directed by Josie Rourke of the Donmar Warehouse. Of Greek and French heritage, she is fluent in Mandarin and proficient in ASL. She premiered at Sundance Film Festival for Ry Russo-Young's YA film adaptation Before I Fall. Additional credits include My Big Fat Greek Wedding 2, Jason Reitman's films Men, Women and Children alongside J.K Simmons, Jennifer Garner and Labor Day with Kate Winslet and Josh Brolin, Tom McCarthy's The Cobbler Elena most recently lead the cast of the upcoming re-imagining of Stephen King's short story Children of the Corn, shot in Australia. Produced by Lucas Foster (Ford v Ferrari) Doug Barry (FML) John Baldecchi (Happy Death Day) and directed by Kurt Wimmer, this was the the only film in the world to shoot entirely during the COVID lock-down, which by it's successful conclusion, historically produced the first test-proven 81 page safety-on-set protocol manual. In addition, Elena can be seen on Netflix in Before I Fall, Summer Night as well as Shoplifters of the World with Joe Manganiello and Thomas Lennon.