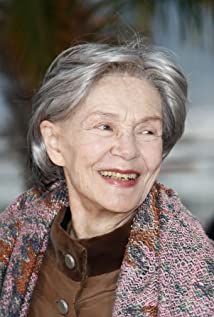 An only child, Emmanuelle was born Paulette Germaine Riva in Cheniménil, but eventually grew up in Remiremont. Her mother, Jeanne Fernande Nourdin, was a seamstress. Her father, René Alfred "Alfredo" Riva, was a sign writer. Her paternal grandfather was Italian. She dreamed of becoming an actress since she was six, so that the entire world would take notice of her. This ambition was, however, to be met with firm opposition from her own family. Emmanuelle's father, a strict disciplinarian to whom the word "actress" was basically a synonym for "prostitute", disapproved of her way of thinking, since it clashed with the simple values he wished to pass on to her. Emmanuelle felt great affection towards her parents, but, at the same time, was under the impression that they couldn't really understand what she wanted. A bit of a tomboy and a rebel in her schooldays, she showed little interest in studying, but always directed her passion towards acting, appearing in every year-end play. In her early 20's, Emmanuelle was to find out the true meaning of nervous depression. Having completed the seamstress apprenticeship she had started at age 15, she eventually resigned herself to take up this profession, also discouraged by the thought that, in a city like Remiremont, the only possible alternative was to become a hairdresser. The sense of boredom that was weighing her down actually got so devouring that sewing sort of became the only form of escape from the horror of her everyday reality. But luckily, things were soon to change for the better. The day Emmanuelle discovered the announcement of a contest at the Dramatic Arts Centre of Rue Blanche was the day she found the courage to stand up to her parents and state that she would have traveled to Paris to become an actress. Having finally understood the depth of her sadness, her family couldn't oppose her wishes any longer, so, on the 13th May of 1953, she arrived in Paris.At the Rue Blanche contest, Emmanuelle auditioned in front of one of the leading actors and directors of the Comédie-Française, the great Jean Meyer. She acted one scene from "On ne badine pas avec l'Amour" by Alfred de Musset. Meyer and the other acting teachers in the jury were just mesmerized by her performance and immediately realized that they had found the next big thing. It goes without saying that Emmanuelle was awarded a scholarship and Meyer himself decided to take her as his own pupil. At 26, Riva was too old to enter the French National Academy of Dramatic Arts, but she soon got her big break anyway, since French stage pillar René Dupuy cast her in a production of George Bernard Shaw's "Arms and the Man". Her next theatrical credits were "Mrs.Warren's Profession" (Shaw), "L'espoir" (Henri Bernstein), "Le dialogue des Carmélites" (Georges Bernanos), Britannicus (Jean Racine), "Il seduttore" (Diego Fabbri). Emmanuelle's small screen debut was in a 1957 episode of the history program Énigmes de l'histoire (1956), "Le Chevalier d'Éon". In the program, she played the Queen of England opposite Marcelle Ranson-Hervé as the cross-dressing knight in the service of the French crown. 1958, on the other hand, was the year that saw her first film appearance, an uncredited role in the Jean Gabin movie The Possessors (1958). The following year would, however, mark a turning point in her career. Emmanuelle was starring in the Dominique Rolin play "L'Epouvantail" at the "théatre de L'Oeuvre" in Paris when one night she found a visitor in her dressing room. His name was Alain Resnais and he was a young director responsible for a few shorts and documentaries (including the Holocaust-themed masterpiece Night and Fog (1956)). He was apparently looking for the female lead of his first feature film, Hiroshima Mon Amour (1959), based on a script by the great author, Marguerite Duras. Having seen a picture of Riva in a playbill of the production she was starring in, Resnais had immediately urged to see her. Without promising her anything, the director just asked Emmanuelle if he could take a few photos of her, so that he would have later shown them to Duras for a response. In addition to this, he also invited her at his place where he filmed her reciting some lines from "Arms and the Man". When he brought Duras the material, the author set her eyes on Emmanuelle's melancholic, enigmatic expression and immediately realized that they had found the one they were looking for. "Hiroshima Mon Amour" turned out to be one of the most acclaimed and representative movies of the French New Wave and launched both Resnais and Riva's careers in full orbit. Being somehow familiar with a sense of captivity, Emmanuelle gave an incredibly personal and involving performance as the unnamed heroine of the movie, and it was one that came straight from her heart. Playing an actress from Nevers who develops a love affection towards a Japanese architect (Eiji Okada) while filming an anti-war movie in Hiroshima, Emmanuelle helped m

A Greek Type of Problem