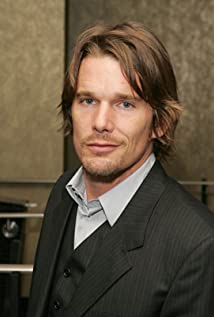 Ethan Green Hawke was born on November 6, 1970 in Austin, Texas, to Leslie Carole (Green), a charity worker, and James Steven Hawke, an insurance actuary. His parents were students at the University of Texas at the time but divorced when Ethan was 5 years old. His mother raised him alone for the next five years, moving around the country, until she remarried in 1981 and the family settled in Princeton Junction, New Jersey.He attended West Windsor-Plainsboro High School and then transferred to the Hun School of Princeton and it was while he was there that he began taking acting classes at the McCarter Theatre on the Princeton campus. His early ambition had been to be a writer, but as a result of the acting lessons and appearances in student productions he persuaded his mother to allow him to attend an audition for a role in a sci-fi adolescent adventure, Explorers (1985). He got the role (along with River Phoenix) but although the movie was favourably reviewed, it met with little commercial success which discouraged Hawke from pursuing further movie roles for several years.He was admitted to the prestigious Carnegie-Mellon University to study theatre but his studies were interrupted when he won his break-through role opposite Robin Williams in Dead Poets Society (1989) and he did not complete his degree. He then appeared in numerous films before taking a role in the Generation X drama Reality Bites (1994) for which he received critical praise. He starred in the romantic drama Before Sunrise (1995), and its later sequels Before Sunset (2004) and Before Midnight (2013).His subsequent acting career was a mix of theatre work (earning a number of awards and nominations, including a Tony Award nomination for his role in "The Coast of Utopia" at the Lincoln Center in New York), and a mix of serious and more commercial movies, notably Gattaca (1997) (where he met his first wife, Uma Thurman) and Training Day (2001). His role as the father in the coming-of-age drama Boyhood (2014) earned him multiple award nominations, including the Academy, BAFTA, Golden Globe, and SAG Award for Best Supporting Actor.Meanwhile, he also wrote two novels: "The Hottest State" (1996) and "Ash Wednesday" (2002).

Glass Onion: A Knives Out Mystery