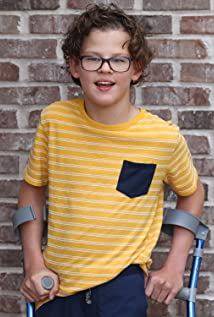 Gavin McHugh, the youngest of five kids, was adopted from Riga, Latvia, at age two and a half. In 2015, the family moved from Atlanta to Los Angeles to pursue opportunities in the acting industry for his older siblings, while Gavin, just starting kindergarten, was fighting to overcome many of the physical limitations caused by his cerebral palsy and adapting to new physical therapists and school life. After tagging along in the transporting of his siblings to a few auditions, he asked for his own audition. Luckily for him--and completely unexpectedly to the rest of the family--opportunities came flooding in, and Gavin has been blessed to be working at a time when inclusivity has become common. Some of his work--which to the delight of his siblings has also led to work for the rest of the family--has included national commercials for Adventist Health, Lincoln Financial, Honda, Target, Walmart, and Tommy Hilfiger; an interview for KTLA; photo shoots for covers of Family Fun Magazine and Los Angeles Magazine; and PR and advertisements for Shane's Inspiration playgrounds, The Mighty Underdogs hip-hop group, A Walk on Water surf therapy, and Inspired by Drive products for special-needs families. In his free time, Gavin loves playing with his siblings--especially at Shane's Inspiration's playgrounds, swimming, surfing, playing at the beach, singing, and reading books, but his favorite thing in the world is "going to set" in order to act and make new friends. Gavin loves his character on "9-1-1" so much that he asks to be called "Christopher" "all the time--not just on set."His siblings are Flynn McHugh, Logan McHugh, Shea McHugh, and Lia McHugh.