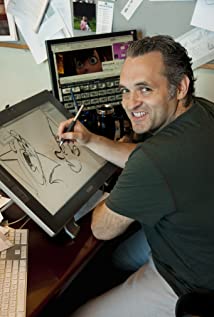 Genndy Tartakovsky was born and raised in Moscow, USSR. He and his family moved to Chicago, IL when he was 7 years old, after his father defected to the US. His interest in comic books and animation led him to study animation at CalArts in Los Angeles. While he was there he produced two student films, one of which was the basis of his series Dexter's Laboratory (1996). The character of Dee-Dee was inspired by his older brother Alex, who would often spoil younger brother Genndy's plans (as Dee-Dee does to Dexter). His first long form directing work was for the TV movie of the series, Dexter's Laboratory: Ego Trip (1999). He also directed animation for his collaborator Craig McCracken on The Powerpuff Girls (1998) and The Powerpuff Girls Movie (2002).His most celebrated work was the epic animated series Samurai Jack (2001), featuring a time-traveling samurai in a battle of good vs. evil. He stopped work on the series to produce Star Wars: Clone Wars (2003) as a direct story tie-in to the beginning of Star Wars: Episode III - Revenge of the Sith (2005). He then directed animation for the Adult Swim pilot Korgoth of Barbaria (2006). Plans were up in the air for over a decade for a possible movie conclusion to Samurai Jack, as well as directing a sequel to The Dark Crystal (1982). He created storyboards for the action-packed opening of Iron Man 2 (2010) during this time period.Genndy produced another dynamic TV series Sym-Bionic Titan (2010), before finally landing his first feature on Hotel Transylvania (2012), which would involve taking over a tumultuous production and incorporating 2D techniques to 3D animation. Hotel Transylvania 2 (2015) was the first film for which he had creative control over the entire production, although it was still in the style developed during the first film. In 2017, he finally returned to direct a darker season of Samurai Jack to conclude the story on Adult Swim. He is currently directing Hotel Transylvania 3: Summer Vacation (2018).