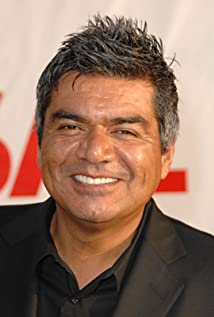 George Lopez was born on April 23, 1961, in Mission Hills, Los Angeles, California, the son of Frieda and Anatasio Lopez, a migrant worker. He is of Mestizo Mexican descent. He was deserted by his father when he was two months old and by his mother when he was 10 years old, but was raised by his maternal grandmother, Benita Gutierrez, a factory worker, and step-grandfather, Refugio Gutierrez, a construction worker. Lopez attended San Fernando High School, graduating in 1979. He is known for starring in his self-produced ABC sitcom George Lopez. His stand-up comedy examines race and ethnic relations, including Mexican American culture. Lopez has received several honors for his work and contributions to the Latino community, including the 2003 Imagen Vision Award, the 2003 Latino Spirit Award for Excellence in Television and the National Hispanic Media Coalition Impact Award. He was also named one of "The Top 25 Hispanics in America" by Time magazine in 2005. In 1993, Lopez married Ann Serrano. The couple has a daughter, Mayan, born in 1996. On September 27, 2010, Lopez announced that he and his wife had decided to end their marriage. Serrano filed for divorce on November 23, 2010, citing "irreconcilable differences. The divorce was finalized on July 1, 2011.

George Lopez: We'll Do It for Half