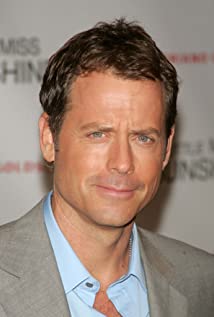 Greg Kinnear was born on June 17, 1963, in Logansport, Indiana, USA to Edward Kinnear, a career diplomat with the US State Department, and Suzanne (nee Buck) Kinnear, a homemaker. He has two brothers -- James, vice president-investments at Wachovia Securities in Arizona who was born in 1957, and Steve, a business manager with the Billy Graham Training Center in North Carolina who was born in 1959. His family moved often, including Lebanon and Greece. While a student in Athens, Greg first ventured into the role of talk show host with his radio show "School Daze With Greg Kinnear".Returning to college in the States, he attended the University of Arizona in Tucson, graduating in 1985 with a degree in broadcast journalism. He headed out to Los Angeles, landing his first job as a marketing assistant with Empire Entertainment. He auditioned to be an MTV VJ, but was not selected and became an on-location reporter for the channel. He had bit parts on L.A. Law (1986) and Life Goes On (1989). He would later become the creator, co-executive producer, and host of Best of the Worst (1991) (1990-91). His breakthrough was as first host of Talk Soup (1991) (1994), when he left the show for the NBC late-night talk show, Later (1994).In 1994, Kinnear had his first big screen role, as a talk show host in the Damon Wayans comedy Blankman (1994). In 1995 he won the role of David Larrabee in Sydney Pollack's remake of Billy Wilder's 1954 classic Sabrina (1995). Next was the lead in the 1996 comedy Dear God (1996). In 1997, he was cast in James L. Brooks's blockbuster comedy-drama As Good as It Gets (1997), receiving an Oscar nomination as best supporting actor. In his next film, the romantic comedy A Smile Like Yours (1997), he starred opposite Lauren Holly as part of a couple trying to have a baby. The film met with lukewarm reviews and a low box office.His next film, You've Got Mail (1998), struck gold. He played Meg Ryan's significant other, a newspaper columnist. Next he played Captain Amazing in Mystery Men (1999). His more recent films have Nurse Betty (2000), Loser (2000), and Someone Like You (2001).

Same Kind of Different as Me