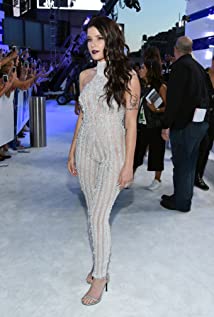 Halsey was born and raised in Clark, New Jersey as Ashley Nicolette Frangipane. She is of Italian, Hungarian, and Irish descent on her mother's side and African-American on her father's side. Growing up, Halsey played the violin, viola, and cello until moving onto the acoustic guitar when she was 14. In one of her first interviews, Halsey stated she was diagnosed with bipolar disorder around the age of 16 or 17. When she was 18, Halsey encountered financial trouble and music became a way to pay her rent. She played numerous acoustic shows in different cities under various stage names. She chose "Halsey" as her moniker because it is an anagram of her real name as well as a street in Brooklyn where she spent a lot of time as a teenager. Halsey originally planned on going to college to major in fine arts, but after realizing she could not afford it, she instead enrolled in a community college as a creative writing major.In an interview, Halsey allegedly used the term "tri-bi" (biracial, bisexual, and bipolar) to identify herself, although she has since distanced herself from it, claiming she was misquoted.

E! Live from the Red Carpet