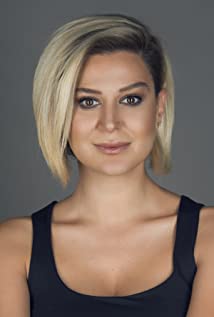 She first got audiences' appreciation with the roles of beautiful and stupid blonde in the series. In 2005 and 2006 she got first main roles at TV series Dolunay, Nefes Nefese and Deli Dolu. She made her real debut in 2010 with the character Simge in Yahsi Cazibe TV series (2010-2012). At that year she selected as the icon character of the year and in 2011 and won Best supporting actress trophy. In 2012, she also had a successful season on the screens with her role of Nevriye Kacak, Pis Yedili TV series also a screenplay of Gani Müjde. She left the project in Chapter 55 and came up with her role as Bihter in Harem TV series (2013). She also starred Sugarworkz-made movies, Hayat Sana Guzel, and My friend Max in 2013. After a supportive role in drama series Neriman she had stooped taking film and series and became a TV star for a while. She was the presenter of the Anneler ve Kizlari and Elimin Lezzeti competitions. However, both of these works did not last long and successful. In 2016, she got back to the series and film business where she had to take a break for a while and gained admiration of the audience with the character of Tavsan Zeynep in the fourth film of the Cakallarla Dans series. After this film, she re-concentrated on cinema, TV series and theater activities and she had a successful period on the stage with her play Her Ask Guzeldir with acting co-star Irfan Kangi. She was chosen as the best actress of the year in 2017 New Theater Magazine Comedy / Musical branch with her role in this play. She shot three movies in 2018. Benden bu kadar is a Fox TV film, Cakallarla Dans a Sugarworkz production with again a break-recording performance in Turkey. She also acted at Aglak Arif which is at post production phase and Hababam Sinifi Yeniden is being shot in 2018 last quarter.