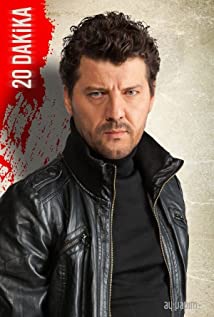 Ilker Aksum is a Turkish film and television actor, born on 23 May, 1971 in Istanbul, Turkey. He is well known for his role in the film "Yabanci Damat" (2004), "Our Grand Despair" (2011), "Kucuk Kiyamet" (2006) and "Vavien" (2009).Ilker Aksum did his schooling at Etimesgut Seker Elementary School. Then he studied at Mehmetcik High School. He completed his graduation from the Theater Department at Mimar Sinan Fine Arts University in 1989. He also studied at the Ankara State Conservatory.Ilker Aksum started his acting career in the Antalya State Theater in 1994. His first professional role was in the "Hamlet" game as Ophelia. He left in Istanbul in 1996 since the staff was not opened. After a short period, he left his military service in Kars Sarikamis. He worked at the Bakirkoy Municipal Theater for a short time and worked at the Istanbul City Theater for a year.Ilker met Taylan Biraderler, when he played a part in the television series "Secret File" with his friend Devin Ozgur Cinar. Later, he appeared in the role of the uncle of the "Tsar" series, which was played by the most famous chimpanzee. He also presented the contest show "One for Two".Aksum appeared in many films. He made his film debut with the film "Our Grand Despair" in 2011. He was the presenters of the 49th International Antalya Golden Orange Film Festival held on 07 October, 2012, which was organized by Iclal Aydin and Ilker Aksum.Ilker Aksum won the Best Supporting Actor Award at the 28th Siyad Turk Sinemasi Awards, for the first feature film "Little Doomsday", which was directed by Durul and Yagmur Taylan brothers in 2006. In 2006, he achieved the Best Supporting Actor award in the 28th SIYAD Turkish Cinema Awards. He won the Best Supporting Actor award in the Ismail Cem Television Awards in 2010. In 2013, he won the Best Actor of the Year in the 18th Sadri Familiar Theater and Cinema Acting Awards for his role in the film "Happy Family Book".Recently, Ilker Aksum has continued to work in films and television series.Ilker Aksum's father's name is Mehmet Bulent Aksum, who is an officer pilot and his mother's name is Nurten Aksum. He has twin brothers, named Ilkay Aksum and Alpay Aksum. He is married to Belgin Erdogan in 2008 and they got divorced in 2012.