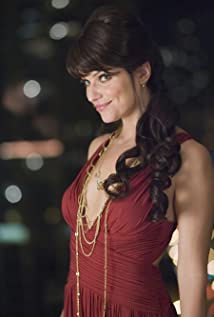 Ivana Milicevic (pronounced Ee-vah-nah Mee-lee-cheh-veech) was born on April 26, 1974, in Sarajevo, Bosnia and Herzegovina (part of Yugoslavia at the time), into a Croat family. She is the daughter of Tonka and Damir Milicevic, and has a younger brother, Tomo. The family emigrated to the United States, and young Ivana was raised in Michigan. She attended Athens High school in Troy, Michigan, and worked as a model during her school years. She became a naturalized citizen of the United States.In 1992, Milicevic graduated from high school and moved to Los Angeles in pursuit of an acting career. She was a struggling stand-up comedienne, trying to win over crowds with her stories of the modeling business. In 1996, she made her film debut under the name Ivana Marina with a one-line role as a former girlfriend of Tom Cruise in Jerry Maguire (1996). In 1997, she followed up with a guest role on NBC's Seinfeld (1989) and made guest appearances on several other television shows, including Royal Pains (2009) and playing the love interest of John Casey on Chuck (2007). She played bit parts in Vanilla Sky (2001) and Love Actually (2003), among her many other cameo appearances. Milicevic capitalized on her experience as a comedienne in a supporting role as Russian model Roxana Milla Slasnikova in the romantic comedy Head Over Heels (2001). She appeared as a lookalike of Uma Thurman's character opposite Ben Affleck, trying to fool him into thinking she is Uma's character, in Paycheck (2003). In a departure from her one-dimensional roles, Milicevic showed her dramatic talent in a supporting role as Milla Yugorsky in a dark and gritty drama Running Scared (2006). In 2006, she started a recurring role on the CBS TV series Love Monkey (2006).In 2006, Milicevic made a big step forward in her career appearing as Valenka, one of three Bond girls in Casino Royale (2006), for which she did most of her scenes on locations in Prague and in London. She resides in Los Angeles, California.