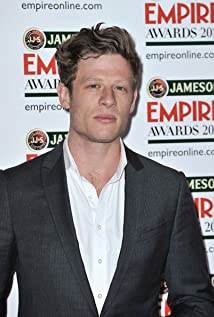 James Norton was born in 1985 to two teachers and has a younger sister who is a doctor. Growing up in North Yorkshire he espoused acting at a very early age - playing Joseph in his primary school nativity play aged five - and, after leaving Ampleforth College he did work experience at the Stephen Joseph Theatre in Scarborough. Rather than go straight to acting school he read theology at Fitzwilliam College, Cambridge and then travelled to Nepal, where he became interested in Buddhism. On return he enrolled at RADA in London, graduating in 2010 and, just before graduating bagging a (very) small part as Carey Mulligan's boyfriend in the final scene of 'An Education'. In 2011 he appeared on the London stage in revivals of 'Journey's End' and 'The Lion in Winter' with Joanna Lumley and Robert Lindsay. At the tail end of 2013 he was in the faux-Austen mystery 'Death Comes To Pemberley' on television but 2014 has been the year when he became known to a wider audience via the period films 'Mr Turner' and 'Belle' as the heroine's first love interest and most particularly violent serial 'Happy Valley' as a murderous kidnapper and rapist and, by contrast in the post-war set whodunit series 'Grantchester' as a tipsy young vicar with a penchant for solving cases.

The Trial of Christine Keeler

To Walk Invisible: The Bronte Sisters