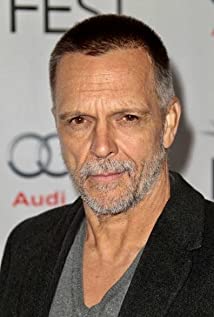 A Manhattan-born character player who attended New York University, actor James Russo wrote and starred in a prize-winning short film, "The Candy Store", while attending college. His first big film break was as a convenience store robber in Fast Times at Ridgemont High (1982). Possessed with a stare that can bring shivers down one's back, he has been quite the accessible villain over the years, memorably portraying a number of gritty psychopaths and gangsters, among other undesirables. Surprisingly, Russo is not a name or commodity, yet an intense and dependable "tough guy" performer he has proven to be. One only needs to be reminded of his sadistic sexual animal role in "Extremities" on stage (in which he won a 1983 Theatre World) and in film (in which he terrorized Farrah Fawcett), to recall how chillingly effective he can be. Other decent roles in films include Kevin Costner's The Postman (1997) and Open Range (2003), plus Beverly Hills Cop (1984), We're No Angels (1989), Donnie Brasco (1997), No Way Home (1996), and a number of low-budget crimers. On stage, he has "Welcome to Andromeda", "Deathwatch", "Marat/Sade" and the afore-mentioned "Extremities" to his credit. Russo appeared opposite Johnny Depp in Roman Polanski's The Ninth Gate (1999), and portrayed mobster "Victor Mura" in TV's short-lived, Falcone (2000), the following year. More recently, he offered a penetrating cameo as Frank Sinatra in Stealing Sinatra (2003).