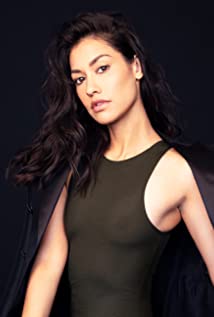 Janina Zione Gavankar (born November 29, 1980) is an American actress and musician. Gavankar is also trained as a pianist, vocalist, and orchestral percussionist. She majored in Theatre Performance at the University of Illinois at Chicago.Gavankar's roles include Papi, a lesbian lothario in The L Word; Leigh Turner, a police officer on The Gates; Ms. Dewey, the personification of a Microsoft branded search engine who commented on the user's searches; Shiva, the namesake of the sought-after trophy on The League; shapeshifter Luna Garza on HBO's True Blood; McKenna Hall on The CW's Arrow; and Meredith Bose on NBC's The Mysteries of Laura. She also played Diana Thomas on FOX's supernatural drama Sleepy Hollow.Gavankar was born in Joliet, Illinois, to Peter Ganesh Gavankar, an engineer from Mumbai, who first traveled to the U.S. to pursue a master's degree, and Mohra Gavankar, from Pune, Maharashtra, who also emigrated to the U.S. from India. Her mother is half-Indian and half-Dutch.Gavankar has acted in theatre, film, television, and online. Her most notable roles include Iden Versio, canon Star Wars character, and protagonist of Star Wars: Battlefront II, shapeshifter Luna Garza in True Blood, lesbian lothario Papi in The L Word; Ms. Dewey, the personification of a Microsoft live search engine; and Shiva, the namesake of the sought after trophy on The League. She regularly appears in Funny or Die shorts.In 2006 she joined the cast of The L Word as a series regular, and shot all of the clips used for Ms. Dewey. In 2007, she landed a lead in CW pilot Dash 4 Cash. In 2008, Gavankar appeared in TV series Stargate Atlantis, Grey's Anatomy and NCIS, My Boys, and Factory. In 2009, she appeared in the TV shows The Cleaner, Dollhouse, Three Rivers, and The League, as well as indie movies Men, Interrupted, Indian Gangster, and Quantum Quest: A Cassini Space Odyssey. Gavankar played the voice of Nikki in Quantum Quest. She landed a lead role in The Gates, since cancelled, on ABC. She appears on CW's Arrow as a vice squad police officer and brief girlfriend to Oliver Queen.Gavankar is an admitted gamer and has appeared on, as well as co-hosted, G4 TV's Attack of the Show!, Epileptic Gaming's Up All Night, where she helped review Rock Band, Burnout Paradise, and Army of Two.In 2011 Gavankar became a series regular in HBO's True Blood as a public school teacher and shapeshifter, Luna Garza, who gets romantically involved with one of the main characters of the series.Her indie movie, Satellite of Love, premiered at the Dallas International Film Festival in 2012, and her 2012 indie I'm Afraid of Virginia Wolf is in post-production. On December 20, 2012, Gavankar was the last person interviewed for the now cancelled Attack of the Show! which aired on G4 TV.On August 3, 2013, Gavankar landed a role as a witch named Qetsiyah in the fifth season of The Vampire Diaries. She guest starred in the third season of Husbands.In 2014, she starred as Amita in the video game, Far Cry 4. She also played Detective Meredith Bose on The Mysteries of Laura from 2014 to 2016.She starred as Iden Versio, the main character in the campaign mode of the 2017 Electronic Arts video game Star Wars Battlefront II.In 2018, she has two films releasing. Blindspotting is premiering at the Sundance Film Festival, and The Vanishing of Sidney Hall is being distributed by A24.Gavankar returned to music with a cover of Kanye West's "Love Lockdown". Gavankar's former all female singing group, Endera, was signed to Cash Money Records Universal Records.She collaborated on a project for a song called "Tell Me What" in India with Pratichee Mohapatra of Viva, Deep, and Navraaz. She has had songs licensed to movies and television, and has sung and played marimba on film scores. Gavankar was featured in Russian artist Ella Leya's music video for "Wish I Could", in the music video by San Francisco-based band Recliner for their single "Float Away", as well as the music video for Manu Narayan's band Darunam.In August 2012, she released the single for her upcoming EP, entitled Waiting for Godot, and in November, Billboard premiered the official music video. It went on to win numerous film festival awards.While in high school, Gavankar auditioned for the front ensemble of the Phantom Regiment Drum and Bugle Corps of Rockford, Illinois. Before hearing whether she had made the corps, she was accepted for the Yale School of Drama's summer camp, and went there. "I fell in love with drum corps when I was 13 years old", Gavankar has stated, and remains a strong fan of the activity. When she heard the Martin Garrix/Usher collaboration, "Don't Look Down", she had the idea of performing it as marching music. With assistance from Drum Corps International, she contacted the Jersey Surf Drum and Bugle Corps and arranger Colin Bell. She went into the studios in New York with fifty members of Jersey Surf and recorded the music video "Don't Look Down- #JustAddDrumCorps Edition" that was re

Tales of the Jedi