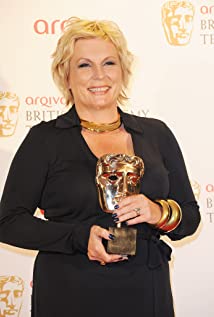 Jennifer Saunders was born July 6, 1958 in Sleaford, Lincolnshire, to Jane, a biology teacher, and Robert Thomas Saunders, an RAF pilot. She attended Central School of Speech and Drama where she met her comedy partner Dawn French. Like many of the early 80s groundbreaking "alternative" comedians she began her career as comedienne/actress/writer with Dawn French at "The Comedy Store" in London, where she met fellow comedians Adrian Edmondson (later her husband), Rik Mayall, Nigel Planer, Alexei Sayle and Peter Richardson, who later opened his own club, "The Comic Strip", where these comedians quickly formed a regular format.The Comic Strip team were transferred to television screens with great success as they all starred alongside each other in The Comic Strip Presents... (1982). After The Comic Strip she starred in a few episodes of The Young Ones (1982), Girls on Top (1985) and Happy Families (1985). Afterwards she and Dawn French wrote a TV show of their own, French and Saunders (1987), which was an immense success due to the double act's genius writing, brilliant acting performances and hilarious spoofs of world famous blockbusters and bands.It was in one of the episodes of "French and Saunders" that the audience had the pleasure of watching a sketch about an uptight daughter and a crazy, neurotic mother that became a comedy classic sitcom. When the BBC next asked Saunders to write something, she just couldn't come up with any ideas, so she decided to expand on that sketch, making it more outrageous and therefore funnier - Absolutely Fabulous (1992) was born.Perhaps by coincidence Saunders had created one of the most loved, funny, and creative TV Shows in BBC history. Three series were made, in 1995 the show was put on hold until Saunders began writing again and came back with a fourth series in 2001. She is always ready for charity as well, she has been doing "Comic Relief" with a lot of her comedy companions ever since 1986. Jennifer Saunders, one of the most loved TV faces in Britain, will hit the screens with her fifth series of Absolutely Fabulous in 2003.

Chuck Steel: Night of the Trampires

The Boy in the Dress