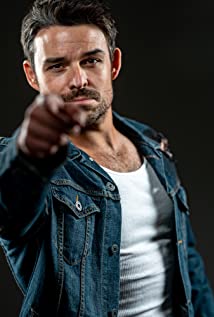 Jesse Hutch sits across from me with a relaxed posture and easy smile. Some say he reminds them of a young Tom Cruise or Matt Damon. I see the resemblance, not just in physical appeal but in mannerism. Hutch is approached about the preference of directors chair he would like to sit in, he chooses the shorter of the two: "I like to have my feet on the ground" Mr.Hutch says with ease. Although Mr.Hutch looks as though he's barely aged since his first official television role on James Camerons "Dark Angel", his salt and pepper hair and laid back attitude portray him as a man of depth and experience. Mr Hutch states that he has never had a drop of alcohol in his life. This could explain his looks. I notice he's constantly making people laugh while also bringing a weight and a stillness to particular subjects when necessary. I've noticed that family, character and integrity seem to be foundational principles for Mr.Hutch. I learn a lot just from watching him but I ask: "What's a piece of advice you would give to a new performer starting out in the film business?" Hutch: "If you want to be a better actor, start living for other people. Get married. Have kids. Take care of your grandmother. Go read books at a seniors home twice a week. You need to live for others. If you hang on to your dream too tight you will strangle it. You will eventually be filled with bitterness and comparison, and auditions will become your everything. I'm not saying don't work hard. Absolutely you must work hard, but don't let show biz become your only reason for living." During our interview I'm personally intrigued by a few events of Mr.Hutch's life. I won't go into detail but I will bullet point some examples. -Parents divorced when he was 11. -Given the computer science award in grade 8. -Has records of perfect attendance from 9 to 12th grade. -Was a white water raft guide for 5 years before beginning his acting career. -Drowned when he was 20 years of age(I was on the edge of my seat listening to the events). -Met his wife at a house party that he didn't want to go to.(they have 3 children together). -Re-connected with his father after 24 years(this story touched me deeply). -Hutch has a deep affinity for ice cream, white water kayaking and watching movies. Lets list a few of Hutch's credits that stand out for me. I choose the following because I'm trying to pin Jesse as a particular type of actor and I'm finding him to be wonderfully elusive. He casually goes from being a romantic lead to being a tough cop, a tender father, a comedic leading man and a bearded psychopath. "I love moving around. I want to be the most well rounded performer I can be. I understand that people want to know what you're good at, or where you fit, but I really enjoy variety in my roles. I want to touch peoples heart through drama, comedy, action, thrill and everything in between" says Hutch. My selects of Mr.Hutch's ability to transform into different characters: Freddy vs. Jason,American Dreams,Project Blue Book,The Butterfly Effect, Smallville, The 100, Wu Assassins, and Cedar Cove. These are but a few samples of Hutch's work over the past 20 years. He appears to be a Leading man with the ability to also lead both on, and off the set. I ask:"What do you think is the most important part of any project?". Without hesitation, Hutch replies: "The people. people come first. Learn their names, respect what they do, lift them up with words and encouragement. If you're ever blessed to be working on set, always show up and be a thermostat, not a thermometer. You walk onto set and you do not take the temperature and adjust, you set the temperature." I glance through his social media accounts and I see many of his responses to fans are fun, genuine, filled with thankfulness and humour. I LOL'ed several times. Hutch was born in the same location as the Marvel hero Wolverine. This could be nothing more then a fun fact, however, it does not excuse why Mr. Hutch is immune to Tylenol and Novocaine(most commonly used in dental practice). He fell from a 25 foot rock quarry while free climbing in middle school. Had his stomach cut open by a barbed wire fence when he was 10, and he moved across the country(solo) when he was 21 to pursue acting. This was the first time he was on an airplane. Now, after 19 years of being an actor, Jesse Hutch says he is still working on his: "20 year overnight success story". As mentioned, you may have seen him in classics such as Freddy vs Jason or The Butterfly Effect. Maybe you saw him in the 60's as Jimmy Riley on Dick Clark's American Bandstand(American Dreams). Dark Angel, Kyle XY, Smallville, Arrow, Almost Human and Cedar Cove are but a few of his television roles. Keep an eye out for his latest roles on Project Blue Book, Supernatural, Wu Assassins and Coffee & Kareem. Mr Hutch recently Directed, wrote and acted in a proof of concept for a new television series. When asked what his best role has been to date, his response: "My best rol

The Lost Wife of Robert Durst