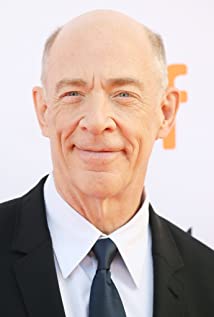 J.K. Simmons is an American actor.He was born Jonathan Kimble Simmons in Grosse Pointe, Michigan, to Patricia (Kimble), an administrator, and Donald William Simmons, a music teacher. He attended the Ohio State University, Columbus, OH; University of Montana, Missoula, MT (BA in Music).He had originally planned to be a singer and studied at the University of Montana to become a composer.He starred as Captain Hook and Mr. Darling opposite gymnastics champ Cathy Rigby in the Broadway and touring revivals of Peter Pan.He played Benny South-street in the 1992 Broadway revival of Guys and Dolls and can be heard on the cast recording.He did a commercial voice-over work, including the voice of the yellow M&M in the candy's TV ads.He appeared as police psychiatrist Emil Skoda on Law & Order (1990), Law & Order: Special Victims Unit (1999) and Law & Order: Criminal Intent (2001).As of 2011, has made five films with director Sam Raimi: For Love of the Game (1999); The Gift (2000); Spider-Man (2002); Spider-Man 2 (2004); and Spider-Man 3 (2007).He won many awards from 2005 to 2007 in Screen Actors Guild Awards. In 2014 won Oscar for Best Performance by an Actor in a Supporting Role. 2015 won a Golden Globe for his Best Performance as an Actor in a Supporting Role in a Motion Picture, BAFTA Film Awards Best Supporting Actor, Independent Spirit Awards Best Supporting Male.