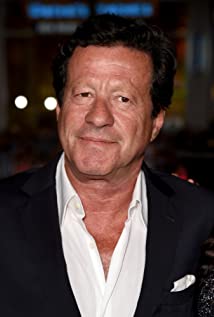 Joaquim de Almeida was born in Lisbon, Portugal. Son of two pharmacists and the sixth of eight kids, Joaquim showed signs at an early age that his future lay not in the family business. At the age of eighteen, after attending the theater course at the Lisbon Conservatory for two years, he left Portugal to pursue his studies after the Conservatory was temporarily closed following the 1974 democratic revolution. He lived a year in Vienna, Austria, working in various jobs from the Künstlerhaus-Theater to gardening. He moved to New York City in 1976. There, he studied with Lee Strasberg, Nicholas Ray and Stella Adler while working as a bartender. After doing some theater and small roles in Soap Operas, he finally landed his first role in a film "The Soldier" in 1981. The following year he had his first important role in "Honorary Consul", working next to Richard Gere, Michael Caine and Bob Hoskins. But it was his third film "Good Morning Babylon", directed by Paolo and Vittorio Taviani, that opened the Cannes Film Festival in 1987, that propelled him to an international career. Being fluent in six languages has helped him to work everywhere in the world. He hasn't stopped since then. He has been in more then 90 films and Television shows acting with actors and directors like Harrison Ford, Gene Hackman, Kim Basinger, Antonio Banderas, Robert Rodriguez, Steven Soderberg, Benicio del Toro and Kiefer Sutherland among others. It was while playing the main villain in season 3 of the popular series "24", that he discovered the pleasure of living on the beach and he moved to Santa Monica where he lives today. He spends long periods in Portugal where he has a house in Sintra to be with his son Louren and his daughter Ana. Joaquim de Almeida became an American citizen in 2005 and kept his Portuguese nationality. He has been the recipient of many awards: Best Actor - Cairo Film Festival 1991, Golden Globe Best Actor Portugal 1995,1997,2001, SAG Awards- Best ensemble 2005, Portuguese Foreign Press-Personality of the year 1995, Career Award in Festival Cinema de Badajoz 2004, Career Award Festival Iberoamericano de Huelva 2009, Career Award Festival de Cine de Punta del Este 2003, Gold Medal City of Sintra 2008, Gold Medal City of Setubal 2006 and the Order of Infante by the President of Portugal.

Our Brand Is Crisis

A Date with Miss Fortune

Atlas Shrugged: Who Is John Galt?