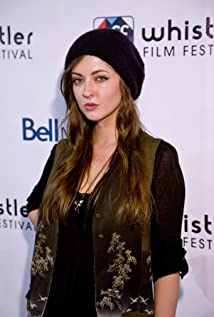 Katharine Isabelle was born Katharine Isobel Murray in Vancouver, British Columbia to Graeme Murray, an art director and production designer who has won two Emmy Awards for his special effects work on the television series The X-Files (1993) and Gail Murray, an amateur Vancouver writer and producer. Isabelle is the sister of journalist and former child actor Joshua Murray.Breaking into acting in 1989 with parts in the films Cousins (1989), Cold Front (1989) and MacGyver: The Madonna (1989) episode of MacGyver (1985), Isabelle quickly proved herself as a skilled actor.In 1992, she played the role of Erica Sanderson in Knight Moves (1992). American audiences took notice of her as Lindsay Clark in the teen thriller Disturbing Behavior (1998).In 2000, Isabelle landed the lead role in the cult-favorite Ginger Snaps (2000), where her stand-out performance will leave a mark in the minds of viewers.Continuing her busy career, she portrayed Tia in Bones (2001), Paige Fleming in Turning Paige (2001) and Tanya Francke in Insomnia (2002), opposite Al Pacino.Throughout the 2000s, Isabelle appeared in several horror and slasher films, including Carrie (2002), Spooky House (2002), Freddy vs. Jason (2003), opposite Robert Englund as well as Ginger Snaps 2: Unleashed (2004) and Ginger Snaps Back: The Beginning (2004).She was also in varied independent films, among which Falling Angels (2003), On the Corner (2003), The Last Casino (2004), Everything's Gone Green (2006), the short film Favourite People List (2009), and Frankie & Alice (2010).Isabelle has guest-starred in numerous popular television series throughout her career, some notable ones being The X-Files (1993), Da Vinci's Inquest (1998), Smallville (2001) and Supernatural (2005).In 2008, she received the Gemini Award for Best Performance by an Actress in a Featured Supporting Role in a Dramatic Program or Mini-Series for her role as Norma Carlyle in the praised TV adaptation The Englishman's Boy (2008).In 2012, Isabelle starred in the controversial horror film American Mary (2012) which earned her special mention at the Austin Fantastic Fest in addition to a Festival Trophy Award for Best Actress, a Special Award for Best Actress, a Fright Meter Award for Best Actress and a Fangoria Chainsaw Award for Best Leading Actress.Followed appearances in 13 Eerie (2013), Torment (2013) and Lawrence & Holloman (2013) for which she obtained a Leo Award nomination for Best Supporting Performance by a Female in a Motion Picture.She also caught the eye of many with her magnetic portrayal of Margot Verger in the second and third seasons of the critically acclaimed NBC TV series Hannibal (2013).In 2014, she reunited with American Mary (2012) creators Jen Soska and Sylvia Soska in See No Evil 2 (2014).In 2015, Isabelle starred in the thriller film 88 (2015) and the horror film The Girl in the Photographs (2015). That year, she could also be seen in the indie film How to Plan an Orgy in a Small Town (2015), alongside Jewel Staite, Lauren Lee Smith and Ennis Esmer.

The Girl in the Photographs