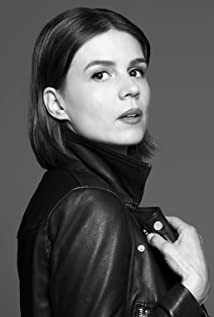 Katja Herbers is the daughter of violinist Vera Beths and oboist Werner Herbers. Growing up she spent time in America, accompanying her mother on tour with the chamber music group L'Archibudelli. Her mother remarried cellist Anner Bylsma and her father remarried costume designer Leonie Polak, who introduced her to the theater. She had a Canadian au pair and learned to speak Dutch, German, and English growing up.Herbers went to the Ignatius Gymnasium in Amsterdam. She studied psychology at the University of Amsterdam. During her psychology studies she attended the local theatre school De Trap. She moved to New York and went to the HB Studio. She then got accepted to the Theaterschool in Amsterdam.During her studies, she starred in the films Pietje Bell (2002) and Brush with Fate (2003). After graduation, Herbers became a member of Johan Simons' Theater Company NTGent in Ghent. She then joined the renowned Munich Kammerspiele in Germany. She worked with directors such as Alex van Warmerdam, Ivo van Hove and Theu Boermans under whose direction she performed many Schnitzler plays, including his monologue Fräulein Else, for which she received rave reviews. In 2013, she won the Guido de Moor Award for young talent, for her portrayal of Irina in Chekhov's Three Sisters. She played a lead role in Theu Boermans' The Chosen, which won an International Emmy and the prestigious Prix D'Europe.Katja is also a gifted singer and has performed Im Wunderschönen Monat Mai - a composition inspired by the great Schubert and Schumann songs by Reinbert de Leeuw especially written for an actress.While achieving many successes on stage, Katja continued filming as well. She worked with the Oscar Nominated and International Emmy Awarded Director Ben Sombogaart on the Dutch blockbuster feature The Storm (2009). Critics raved about her portrayal of the Dutch Queen (then Princess) Maxima in the mini-series Beatrix, Oranje onder Vuur (2012). Rudolf van den Berg directed her in the feature film Süskind (2012), in which she played the right hand of Dutch war hero Walter Süskind, who helped escape over a thousand children during World War II. Jelle de Jonge directed her in the romantic comedy Weg van jou (2017), which she co-wrote.Really all of Holland knows her for her portrayal of the emotionally unstable but lovable Joyce in the TV hit series Divorce (2012), which glues a record breaking 25% of all Dutch television viewers to the screen every Sunday evening.Internationally, Katja is known for playing physicist Helen Prins on Sam Shaw's Manhattan (2014). She had a recurring role on season three of FX's The Americans (2013). She played Dr. Eden on the final season of HBO's The Leftovers (2014), and starred opposite Mark Duplass in Manhunt (2017).In 2018 she joined HBO's Westworld (2016) as Grace/Emily.Katja divides her time between Los Angeles, New York and Amsterdam.

My Granpa, the Bankrobber