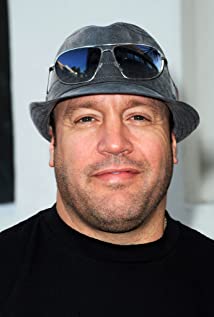 Kevin James was born Kevin George Knipfing on April 26, 1965, in Mineola, Long Island, New York, to Janet (Klein), an office worker, and Joseph Valentine Knipfing, Jr., an insurance agency owner. He was raised in Stony Brook, and attended SUNY Cortland, where he played fullback on the football team while majoring in sports management. He realized after three years that this wasn't the path for him. After returning home, he decided to break up the monotony of the summer, and joined a community theater. During a play in which he had a comedic role, he so enjoyed the crowd reaction, that he joined his brother's (comedian Gary Valentine's) improv group. He began going to clubs with Gary and realized he, too, had the knack for comedy. He has performed stand-up up for about 11 years. It was on the comedy circuit that he met Ray Romano. While Ray was getting a big break with his own sitcom, Kevin was getting recognition on Star Search (1983). After appearing on The Tonight Show with Jay Leno (1992), his big break came at the 1996 "Just for Laughs" Montreal Comedy Festival. Afterward, he landed a recurring role on Ray's sitcom, Everybody Loves Raymond (1996).He starred in his own sitcom, The King of Queens (1998), as Doug Heffernan, from 1998 to 2007, and later began a career as a leading film actor, co-starring in Hitch (2005), I Now Pronounce You Chuck & Larry (2007), Grown Ups (2010), and Grown Ups 2 (2013), and headlining Paul Blart: Mall Cop (2009), Zookeeper (2011), Here Comes the Boom (2012), and Paul Blart: Mall Cop 2 (2015).

Kevin James: Never Don't Give Up