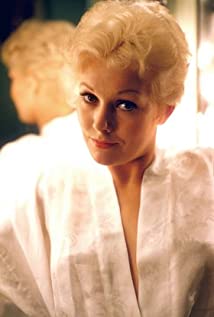 Kim Novak was born in Chicago, Illinois on February 13, 1933 with the birth name of Marilyn Pauline Novak. She was the daughter of a former teacher turned transit clerk and his wife, also a former teacher. Throughout elementary and high school, Kim did not get along well with teachers. She even admitted that she didn't like being told what to do and when to do it. Her first job, after high school, was modeling teen fashions for a local department store. Kim, later, won a scholarship in a modeling school and continued to model part-time. Kim later worked odd jobs as an elevator operator, sales clerk, and a dental assistant. The jobs never seemed to work out so she fell back on modeling, the one job she did well. After a stint on the road as a spokesperson for an appliance company, Kim decided to go to Los Angeles and try her luck at modeling there. Ultimately, her modeling landed her an uncredited role in the RKO production of The French Line (1953). The role encompassed nothing more than being seen on a set of stairs. Later a talent agent arranged for a screen test with Columbia Pictures and won a small six month contract. In truth, some of the studio hierarchy thought that Kim was Columbia's answer to Marilyn Monroe. Kim, who was still going by her own name of Marilyn, was originally going to be called "Kit Marlowe". She wanted to at least keep her family name of Novak, so the young actress and studio personnel settled on Kim Novak. After taking some acting lessons, which the studio declined to pay for, Kim appeared in her first film opposite Fred MacMurray in Pushover (1954). Though her role as "Lona McLane" wasn't exactly a great one, it was her classic beauty that seemed to capture the eyes of the critics. Later that year, Kim appeared in the film, Phffft (1954) with Jack Lemmon and Judy Holliday. Now more and more fans were eager to see this bright new star. These two films set the tone for her career with a lot of fan mail coming her way. Her next film was as "Kay Greylek" in 5 Against the House (1955). The film was well-received, but it was her next one for that year that was her best to date. The film was Picnic (1955). Although Kim did a superb job of acting in the film as did her co-stars, the film did win two Oscars for editing and set decoration. Kim's next film was with United Artists on a loan out in the controversial Otto Preminger film The Man with the Golden Arm (1955). Her performance was flawless, but it was was Kim's beauty that carried the day. The film was a big hit. In 1957, Kim played "Linda English" in the hit movie Pal Joey (1957) with Frank Sinatra and Rita Hayworth. The film did very well at the box office, but was condemned by the critics. Kim really didn't seem that interested in the role. She even said she couldn't stand people such as her character. That same year, Novak risked her career when she started dating singer/actor Sammy Davis Jr.. The interracial affair alarmed studio executives, most notably Harry Cohn, and they ended their relationship in January of the following year. In 1958, Kim appeared in Alfred Hitchcock's, now classic, Vertigo (1958) with James Stewart. This film's plot was one that thoroughly entertained the theater patrons wherever it played. The film was one in which Stewart's character, a detective, is hired to tail a friend's wife (Kim) and witnesses her suicide. In the end, Stewart finds that he has been duped in an elaborate scheme. Her next film was Bell Book and Candle (1958) which was only a modest success. By the early 1960s, Kim's star was beginning to fade, especially with the rise of new stars or stars that were remodeling their status within the film community. With a few more nondescript films between 1960 and 1964, she landed the role of "Mildred Rogers" in the remake of Of Human Bondage (1964). The film debuted to good reviews. In the meantime, Kim broke off her engagement to director Richard Quine and embarked on a brief dalliance with basketball player Wilt Chamberlain. While filming The Amorous Adventures of Moll Flanders (1965), she had a romance with co-star Richard Johnson, whom she married, but the marriage failed the following year. Kim stepped away from the cameras for a while, returning in 1968 to star in The Legend of Lylah Clare (1968). It was a resounding flop, perhaps the worst of her career. However, after that, Kim, basically, was able to pick what projects she wanted. After The Great Bank Robbery (1969) in 1969, Kim was away for another four years until she was seen with then-boyfriend Michael Brandon in a television movie called The Third Girl from the Left (1973), playing a veteran Las Vegas showgirl experiencing a midlife crisis. In a personal development, Novak met equine veterinarian Robert Malloy in October 1974 and the couple married in 1976. Subsequent films were not the type to get the critics to sit up and take notice, but afforded her the opportunity to work with strong talent. She appeared to good effect in Sa

A Night at the Movies: The Suspenseful World of Thrillers

To Each His Own Cinema