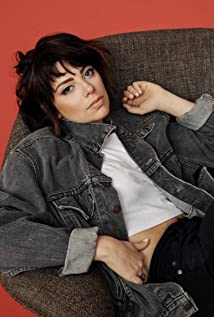 Krysta Anne Rodriguez (born July 23, 1984) is an American actress and singer. She is best known for her roles as Ana Vargas in the NBC series Smash, Summer Henderson in the NBC series Trial & Error, Maxine Griffin in the ABC series Quantico and Ms. Crumble in the Netflix comedy series Daybreak.Rodriguez grew up in Orange County, California. She began taking dance lessons at the age of 13, after being involved with cheer-leading in middle school. After traveling to New York and seeing eight Broadway shows, she realized performers had to sing and act as well as dance, so once she returned home Rodriguez began taking singing and acting lessons. She was a cast member of the Christian television show Colby's Clubhouse from 1995 to 2000. She attended Orange County High School of the Arts where she played many lead roles including Marian in The Music Man, as well as the lead role in Gidget: The Musical, a musical co-written and directed by Francis Ford Coppola, that starred Orange County High School of the Arts students during its tryouts in 2000. She attended New York University for a few years, but began working soon after enrolling.Rodriguez made her Broadway debut in the short-lived 2005 jukebox musical Good Vibrations. She later became a replacement for the role of Bebe in the Broadway revival of A Chorus Line in 2007. She has played numerous ensemble and understudy parts in the Broadway productions of Spring Awakening and In the Heights, as well as a regional production of The Boy Friend directed by Julie Andrews. She made her feature film debut in the role of Krysta in the 2010 film The Virginity Hit.Beginning performances in fall 2009, Rodriguez originated the role of Wednesday Addams in the world premiere Chicago try-out run of the new Broadway-bound musical The Addams Family, based on the cartoons of Charles Addams. From March 2010, the show received its planned debut at New York's Lunt-Fontanne Theatre. After playing the role for over a year and lending her voice to the show's original cast recording, Rodriguez left the musical on March 8, 2011 and was replaced by Rachel Potter.Other credits include an Encores! production of Bye Bye Birdie. Her first television role was a guest appearance as the character Jordan Steele in Gossip Girl. In 2011, Rodriguez starred in the television movie Iceland as Rose, one of a group of friends who reunite to heal and nurture each other after the death of one of their own.In 2012, Rodriguez starred in another television movie Shadow of Fear as Lauren. The movie is about the push and pull between a schizophrenic new waiter and a popular young waitress. In 2013, she guest starred in the web series created by Mitchell Jarvis and Wesley Taylor, It Could Be Worse. She played an assistant to a Broadway Star named Bridgett/Bridget in two episodes entitled Payment Plan and Let Your Hair Down.Rodriguez joined the cast of the NBC series Smash for its second, and final, season in 2013, playing the role of Ana Vargas, an aspiring Broadway performer and the new roommate of Katharine McPhee's character Karen.In July 2013, Rodriguez returned to Broadway playing the lead in First Date the Musical, co-starring with Zachary Levi.In December 2013, Rodriguez appeared in Hit List, a concert presentation of the fictional musical created for the second season of Smash, as The Diva/Sarah Smith. Rodriguez was scheduled to have a major role in the planned CBS sitcom How I Met Your Dad; a spin-off and successor to the long-running sitcom How I Met Your Mother, but on March 25, 2014 it was announced that Rodriguez had exited the pilot.Rodriguez guest starred on Married in 2014, as Kim, a friend of a couple desperately trying to save their marriage. On Ian, Rodriguez guest starred as Fly Girl. Additionally, Rodriguez starred in the Lifetime holiday movie entitled Wishin' and Hopin' in the role of Annette Funicello, a teen idol, movie actress and Mickey Mouse Club Mousekteer.Also, in the fall of 2014 Rodriguez was diagnosed with breast cancer. In 2015, Rodriguez started the website ChemoCouture.com to create a blog detailing her journey during chemotherapy as well as providing various fashion, beauty, and wellness tips that she employs during her battle with cancer. After going public with her diagnosis, Rodriguez was contacted by Cosmopolitan to blog for their Cosmo Online Health and Fitness readers about her experiences.In 2015, Rodriguez was cast as Vanessa, a straight talking, no-nonsense cancer patient ready to share her truth, in a multi-episode arc in the second season of the ABC Family television show Chasing Life. The season aired in the summer of 2015.Also in 2015, she played Madison in an episode of Inside Amy Schumer. Krysta also guest starred in an episode of The Mysteries of Laura as April Watkins.Rodriguez also recently starred in a film entitled My Bakery in Brooklyn in which she plays one of the lead characters, Chloe. The film was released in 2016.Through June 14, 2015, she returned