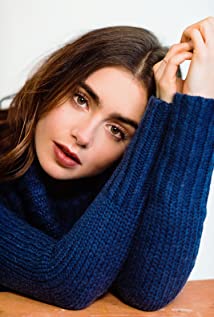 Lily Jane Collins was born in Guildford, Surrey, England. Her father is English musician Phil Collins, while her mother, Jill Tavelman, who is from Los Angeles, California, was president of the Beverly Hills Women's Club for three terms. Lily moved with her mother to LA at the age of five, after her parents split up. She is of Russian Jewish (from her maternal grandfather), English, and German descent.Her first screen role was at the age of two in the BBC series Growing Pains, in 1992. Collins performed at the Youth Academy for Dramatic Arts as a child, but her main interest was journalism. She graduated from the Harvard-Westlake School, and attended the USC, where she majored in broadcast journalism. She began writing a column ("NY Confidential") for the British magazine Elle Girl in her teens as well as contributing to Seventeen, Teen Vogue, and the Los Angeles Times magazines.After some early television appearances as a presenter/reporter (for instance, covering the 2008 US Presidential campaign as a host on the Nickelodeon show, Nick News with Linda Ellerbee: Kids Pick the President (2000)), she made a couple of appearances on 90210 (2008) in 2009. She co-starred as the daughter of Tim McGraw and Sandra Bullock's characters in the massive box office hit The Blind Side (2009). More dramatic roles followed, and she came to worldwide attention when she played the starring role in Mirror Mirror (2012), following it up by headlining The Mortal Instruments: City of Bones (2013) and Love, Rosie (2014).