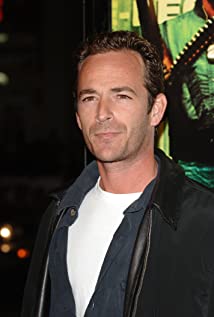 Luke Perry was an American actor, primarily remembered as a teen idol throughout the 1990s and the early 2000s. Perry was born in Mansfield, Ohio in 1966. Mansfield was known at the time as a center for the home appliances and stove manufacturing industries. The city's largest employer used to be the Westinghouse Electric Corporation.Perry's parents were the steelworker Coy Luther Perry Jr. (1944-1980) and his wife Ann. Perry's parents divorced in 1972, when he was 6-years-old. Ann gained custody over her children, and later married construction worker Steve Bennett. Luke was mostly raised by his mother and stepfather, and did not have a close relationship with his biological father. Coy Perry suffered a heart attack in 1980 and died, when Luke was 14-years-old. Luke attended his funeral.Perry was mostly raised in the village of Fredericktown, Ohio, and attended the Fredericktown High School. In his high school years, Perry served in the role of the school mascot, the "Freddie Bird".In 1984, the 18-year-old Perry moved to Los Angeles, with the intention of becoming a professional actor. For several years, Perry kept auditioning for various roles without ever being hired. He supported himself financially by working at odd jobs, and serving as an extra for music videos. His most notable role in this period was in the 1986 music video for the song "Be Chrool to Your Scuel" (1985) by the heavy metal band "Twisted Sister".Perry's first successful audition landed him the role of a recurring character in the soap opera Loving (1983) (1983-1995). From 1987 to 1988, he played the character of Ned Bates. In Perry's own words: "Ned was a dirt-poor mechanic from Tennessee who always got taken advantage of".Perry next received a recurring role in another soap opera, Another World (1964) (1964-1999). From 1988 to 1989, he played the character of Kenny, the manager of aspiring model and actress Josie Watt (played by Alexandra Wilson).In 1990, Perry landed the most significant role of his career, depicting the character of Dylan McKay in the teen drama Beverly Hills, 90210 (1990) (1990-2000). He played the character for a total of 199 episodes. Dylan was the teenage rebel son of business tycoon Jack McKay and hippie ex-wife Iris McKay. He started the series as a loner, but he offered help to nerdy schoolmate Scott Scanlon (played by Douglas Emerson) against the local bullies. This act of bravery gained him new friends and the romantic attention of Brenda Walsh (played by Shannen Doherty).Perry's success in his new role gained him a huge following among teenage girls, and guaranteed that he would receive more job offers. His first starring role in a film was the drama Terminal Bliss (1990) (1992), where he played the self-destructive rich kid John Hunter. The film was a box-office flop.Perry had a more memorable role in the horror comedy film Buffy the Vampire Slayer (1992), as the character Oliver Pike. Pike was a hard-drinking slacker youth in Los Angeles, and had a hostile relationship with high school girl Buffy Summers (played by Kristy Swanson). After Pike's best friend gets turned into a vampire, Pike assists Buffy in her battles with the vampire lord Lothos (played by Rutger Hauer) and his subordinate vampires. Pike is Buffy's sidekick and main love interest in the film, and has appeared in various adaptations, though not in the spin-off television series.Perry had his first voice acting role in the episode, The Simpsons: Krusty Gets Kancelled (1993) of the animated sitcom The Simpsons (1989). He played a parody version of himself as a sidekick of the character Krusty the Clown in a show-within-the-show. Perry had more voice acting roles in other animated television series of this era. He played the Detroit-based crime lord Napoleon Brie in Biker Mice from Mars (1993) (1993-1996), the master ninja Sub-Zero in Mortal Kombat: Defenders of the Realm (1995) (1996), Bruce Banner's best friend and sidekick Rick Jones in The Incredible Hulk (1996) (1996-1997), and Nicky Little's boyfriend Stewart Waldinger in Pepper Ann (1997) (1997-2000).In live-action films, Perry played the starring role of professional bull-rider Lane Frost (1963-1989) in the biographical drama 8 Seconds (1994). He played a version of himself in the Italian comedy film Vacanze di Natale '95 (1995) ("Christmas Vacation '95", 1995), where he is the love interest of infatuated teenager Marta Colombo (played by Cristiana Capotondi). Perry played the police officer and bank robber Chris Anderson in the crime drama Normal Life (1996), while his wife and partner-in-crime Pam Anderson was played by Ashley Judd. He played the suicidal character Johnny in the comedy-drama American Strays (1996), which features the character hiring a professional hit-man to provide him with an assisted suicide.In 1997, Perry played a small role in the science fiction film The Fifth Element (1997). In a scene set in 1914, Perry plays the assistant archaeologist Billy Masterson. Ma

The Beat Beneath My Feet