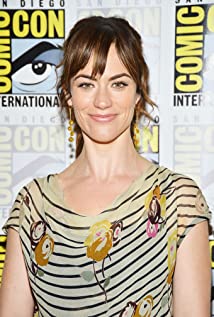 Maggie Siff (born June 21, 1974) is an American actress. Her television roles have included department store heiress Rachel Menken Katz on the AMC drama Mad Men, Tara Knowles on the FX drama Sons of Anarchy, and psychiatrist Wendy Rhoades on the Showtime series Billions. She has had roles in the films Push (2009) as Teresa Stowe and Leaves of Grass (2010) as Rabbi Renannah Zimmerman. She stars in indie film A Woman, a Part (2016) as well as having a minor role in drama film One Percent More Humid (2017).Siff was born in The Bronx, New York City. Her father is Jewish (from a family from Russia), and her mother is of Irish and Swedish descent; she has said that she feels "culturally Jewish". She is an alumna of The Bronx High School of Science and of Bryn Mawr College, where she majored in English and graduated in 1996. She later completed an M.F.A. in acting at New York University's Tisch School of the Arts Graduate Acting Program. Shortly after graduating, Siff also worked as a temp at a hedge fund, an experience she drew on for her role in Billions.Siff worked extensively in regional theater before acting in television. She won a Barrymore Award for Excellence in Theater in 1998 for her work in Henrik Ibsen's Ghosts at Lantern Theater Company.Siff started appearing in television series in 2004. She appeared as an Alcoholics Anonymous speaker during an episode of Rescue Me in Season 2. She also had roles on Law & Order: Special Victims Unit, Grey's Anatomy, and Law & Order.She played Rachel Menken Katz on the series Mad Men from 2007 to 2008, which earned her a nomination, along with the rest of the cast, for a Screen Actors Guild Award for Outstanding Performance by an Ensemble in a Drama Series. She also appeared in Nip/Tuck during that time, before being cast as Dr. Tara Knowles on Sons of Anarchy in 2008.She has appeared in such films as Then She Found Me (2007) as Lily, Push as a psychic surgeon (called a Stitch) named Teresa Stowe, sent to help Nick (played by Chris Evans), Funny People (2009) as Rachel, Leaves of Grass (2010) as Rabbi Renannah Zimmerman, and Concussion (2013) as Sam Bennet. She appears in the 2016 Showtime series Billions. She starred in an independent indie film called A Woman, A Part (2016) as well as One Percent More Humid (2017).

The Short History of the Long Road

A Woman, a Part