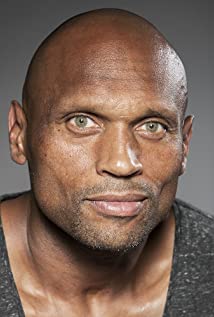 Mark was born in London however he has a hugely colorful heritage - Jamaican, Cherokee Indian, Ghanian, White and Chinese. This mix along with his Green eyes has given him a very distinctive look. Mark first catapulted onto our screens as Rhino in the massive ITV series, GLADIATORS where he reigned for five years. Before the show he had enjoyed huge success as a bodybuilder, winning the Junior British Championships and London Mens Heavyweights. His aggressive style first earned him his nickname, Rhino, which later became his Gladiator name.As Mark Rhino Smith the actor he has gone on to appear in many films and TV dramas. His film work includes the blockbuster BATMAN BEGINS directed by Christopher Nolan for Warners. ARGO as the Evil Villain, Pirates of the Caribbean 4 and CREED in the corner of the opponent to Michael B Jordan. 2016 will also see the release of CRIMINAL and SECURITY. He is the voice of the Rhino, Officer McHorn in Walt Disney's latest movie ZOOTOPIA. "When I got the call from Disney to be the voice for their Rhino it was surreal" says Mark.Alongside his film work 2015 saw him as a recurring guest on the Michael Bay production THE LAST SHIP. He also filmed for NCIS LA and in 2016 just filmed CRIMINAL MINDS, as the love interest for Paget Brewster.On the BBC's Robin Hood series he played the role of an arabian knight, Karim as well as working on other BBC drama's EastEnders and Synchronicity. For ITV, Hustle, The Bill and the Lynda La' Plante production Trial and Retribution.My motto has always been #BelieveAndAchieve.Thanks to my wife and my family and all my friends for all your love and support.