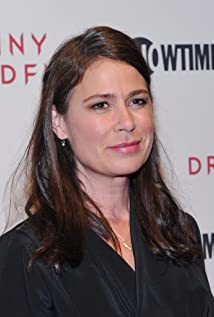 On the viewing horizon since the late 1980s, actress Maura Tierney has been a steady product of independent features, some hits and some misses, for close to a decade and a half. An odd and compelling beauty, she came from an upscale Bostonian family and was raised in the Hyde Park district.Born February 3, 1965, the eldest child of three of Pat, a real estate agent, and Joseph M. Tierney, a prosperous politician and city councilman, Maura Lynn Tierney initially studied at New York University. She left school prior to graduation when she hooked up with the Circle-in-the-Square theater school. Following some stage plays including "Baby with the Bathwater" and "Danny and the Deep Blue Sea," she moved to the West Coast in the late 1980s finding minor roles here and there in TV-movies and making the rounds on episodic shows such as Growing Pains (1985), Family Ties (1982) and Law & Order (1990). She met actor/husband Billy Morrissette after both were fired from the set of an eventually-scrapped Ralph Macchio series.After a few other failed pilots and a short-lived TV series, Maura made a minor film debut with The Linguini Incident (1991) and progressed to leading lady status in the B-movie spoof Dead Women in Lingerie (1990), which didn't go over well. She finally hit paydirt on TV when she won a female co-lead as smart but insecure newswriter Lisa Miller on the comedy series NewsRadio (1995). The show sailed along for a number of seasons due to the fine comedy instincts of Dave Foley, Andy Dick and the late Saturday Night Live (1975) player Phil Hartman. The show lost its oomph, however, as well as its audience after Hartman's tragic 1998 shotgun slaying, despite an assured replacement in fellow Saturday Night Live (1975) alumni Jon Lovitz. The show couldn't escape its bad aura, and it was gone the following year.Maura's work on the TV sitcom thrust her into the film comedy limelight with prominent roles in such films as the Jim Carrey vehicle Liar Liar (1997). She also showed up as sly, darker-edged femmes in the thriller Primal Fear (1996), Primary Colors (1998) and Instinct (1999).Into the millennium, Maura received one of her best art-house roles as a heavy in her husband's feature Scotland, Pa. (2001) which he wrote and directed. Following that came a mixture of offbeat parts in such films as the mystery thriller Insomnia (2002) starring Al Pacino and Robin Williams; the romantic comedy Welcome to Mooseport (2004) with Gene Hackman and Ray Romano; the Paul Rudd dramedy Diggers (2006); the sports comedy Semi-Pro (2008) with Will Ferrell and Steve Guttenberg; the Tina Fey/Amy Poehler slapstick comedy Baby Mama (2008); and, more recently, Nature Calls (2012), Anything (2017) and Beautiful Boy (2018) opposite Steve Carell.She also found steady TV work with the role of Abby, who was first a nurse and then a doctor, in the long-established and critically-acclaimed medical drama series ER (1994), where she remained on the staff until the show left the air in 2009. She also found recurring roles on Rescue Me (2004), The Good Wife (2009) and The Affair (2014), and co-starred in the short-lived legal drama The Whole Truth (2010) with Rob Morrow.

I Know Jake Gyllenhaal Is Going to Fuck My Girlfriend