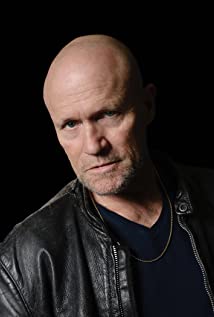 Michael Rooker was born on April 6, 1955 in Jasper, Alabama. When he was thirteen, his parents divorced and he went with his mother to live in Chicago. He caught the acting bug while attending college, and began appearing in local stage productions. On first breaking into film, his intensity and "don't-mess-with-me" good looks were highlighted to chilling effect as he title character in Henry: Portrait of a Serial Killer (1986), filmed in 1986 but, due to its controversial nature, not released until 1990. Since that widely noticed and highly praised performance, much of his career has been spent playing brutes, villains and psychopaths. However, his occasional turns as a "good guy" are always well-acted and a welcome change for a talented actor too often typecast.2017 marks an exciting time for Rooker, as he starred in two films premiering just two months of each other. On March 17, audiences saw Rooker in Blumhouse Tilt's indie horror thriller The Belko Experiment (2016). The film is the terrifying yet humorous look at a group of employees that become guinea pigs in a company-wide experiment that leads them to either kill their fellow employees or be killed themselves. Returning to his indie roots, Rooker starred as maintenance worker, Bud Melks, one of the employees trapped in the office building, who may or may not be able to kill his fellow staff member. On May 5, Rooker reprised his role as Yondu in the highly anticipated sequel, Guardians of the Galaxy Vol. 2 (2017). The film follows the same group of galactic underdogs saving the universe to a stellar soundtrack. Rooker's breakout performance earned him critical acclaim, as audiences were introduced to a more dramatic Yondu. The film went on to earn over $145 million domestically its opening weekend and has surpassed its predecessor by grossing over $850 million worldwide.Rooker made his film debut, playing the title role in Henry: Portrait of a Serial Killer (1986), a film based on the confessions of serial killer Henry Lee Lucas. It was here that audiences were first introduced to Rooker's impeccable ability to channel a character's idiosyncrasies and subtleties. He has also starred in some of the most iconic films, such as Mississippi Burning (1988), Sea of Love (1989), JFK (1991), Tombstone (1993) and Jumper (2008) to name a few. In August 2014, Rooker starred in one of the most memorable franchises in the Marvel Universe, Guardians of the Galaxy (2014), as Yondu, the blue-skinned renegade space pirate and surrogate father to Peter Quill. The film went on to gross over $700 million at the worldwide box office and spent five weekends atop the box office, more than any other film in the Marvel Universe.On the television front, Rooker is best known for his series regular role as Merle Dixon on AMC's hit series The Walking Dead (2010). Audiences loved to hate the ill-tempered redneck hunter and were sad to see him killed off the series in season three. Rooker has completed a variety of stints on some of the most prominent series on television: Criminal Minds (2005), CSI: Miami (2002), Las Vegas (2003), Law & Order (1990) and Archer (2009), among others. Additionally, Rooker's talents go beyond both film and television. He adds his voice to various video games, including The Walking Dead: Survival Instinct, Call of Duty: Black Ops 2, and Lollipop Chainsaw.