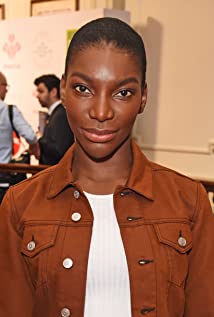 Michaela was born on October 1st 1987 as Michaela Boakye-Collinson to Ghanaian parents and brought up in Tower Hamlets by her mother, a devout member of the Pentecostal church who instilled her religion into Michaela and her sister - something that she would later draw on for her play 'Chewing Gum Dreams. ' Already a poet and performance artist , releasing the album 'Fixing Barbie' in 2009, she obtained a 2.1 in English at university before enrolling at the Guildhall School of Music and Drama, where she was awarded the Laurence Olivier bursary, graduating in 2012. In 2013 she made her stage debut at the Bush Theatre, where she would perform 'Chewing Gum Dreams', later in the year transferring to the National Theatre, where she would return in 2014 to appear in 'Medea' with Helen McCrory. In 2015 a sitcom based on 'Chewing Gum Dreams', its title shortened to 'Chewing Gum' began its run on Channel 4 television and in 2016 she was back on that channel in another comedy-drama 'The Aliens'.

I May Destroy You