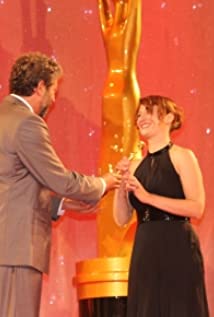 Onur Ünlü is a Turkish film director, producer, screenwriter and actor. He was born in Izmit, Turkey in 1973. He studied Communication Arts in Anadolu University. He gained a Master's degree on Communication Studies from Marmara University. He is a poet and a musician at the same time. All of his poems are published as a book called "Gidiyorum Bu" (Going That). The first movie he has directed, produced and written is called "Polis" (Police)(2006). He was the director of famous Turkish TV show, "Leyla ile Mecnun", which turned out to be the most successful comedy show of the recent years in Turkey. The show has turned out to be a phenomenon in Turkey through the years it was on. He also starred in the TV show "Ben de Ozledim", which is the continuing story of "Leyla ile Mecnun". His movies, "Bes Sehir" (Five Cities) (2009), "Celal Tan ve Ailesinin Asiri Acikli Hikayesi" (The Extremely Tearful Story of Celal Tan and His Family) (2011), "Sen Aydinlatirsin Geceyi" (Thou Gild'st the Even) (2013) and Itirazim Var"(Objection)(2014) are awarded by the international movie festivals.