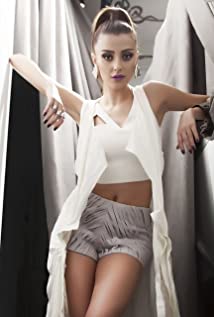 Özge Ulusoy (born Ankara) is a Turkish model, retired ballet dancer and occasional film actress from Izmir. She is best known for her appearance in the popular TV-series Arka Sokaklar from 2006 to 2009. As a model, she walked the runways for Hussein Chalayan, Mavi Jeans, Mudo, Hervé Léger, Balenciaga, Eva Gronbach, Guy Laroche, Emanuel Ungaro, Christian Dior, Marks & Spencer, Harvey Nichols, Mango, etc. She held the first runner-up title for the annual beauty pageant Miss Turkey in 2003. In 2002, Ulusoy finished third in Elite Model Management's Elite Model Look competition, took second place the following year in the Miss Turkey competition, and won the Miss Turkey Universe 2003 title before signing with Ugurkan Erez Model Management in Istanbul. Since her debut, Ulusoy has been the face of a variety of advertising campaigns in Turkey. She has an elder sister, Associate Professor Nilay Ulusoy, an academician in Bahçesehir University and Marmara University and an alumna of Sorbonne.A native of Izmir, Turkey, Özge Ulusoy is a graduate of faculty of fine arts in Hacettepe University, Mimar Sinan University of Fine Arts and Yeditepe University, where she had classical ballet course and arts administration bachelor's degree. She passed her conservatory examinations to be accepted into these most considerable ballet schools at the age of 12. She has first studied in Hacettepe University, two years later she transferred to Mimar Sinan University of Fine Arts in Istanbul. Later in 2003, after holding the first runner-up for the Miss Turkey 2003 title she entered Yeditepe University where she majored in Arts administration with a specialty in classical ballet. She is fluent in Turkish, English, German and French. In 2011, she finished fifth in Survivor: Ünlüler vs. Gönüllüler, the fifth season of Show TV's Turkish version of the reality television game show Survivor, produced by Acun Media.In 2011, after heating up the stage on Yok Böyle Dans -the Turkish version of Dancing With the Stars- for weeks, Ulusoy won the show, along with her professional partner Vitaly Kozmin. Subsequently, she acted in Show TV's comic science fiction series Ha Babam Uzay. She was cast as HRH The Princess Alev in Türk'ün Uzayla Imtihani that was the identical successor of Ha Babam Uzay. She also hosted the backstage of Bugün Ne Giysem which is a fashion competition on Show TV for one season before she became a judge on the show in 2012. Later that same year, she appeared as a special guest star in the thirty fourth episode of the Kanal D series Yalan Dünya as herself.Ulusoy has been in a relationship with Haci Sabanci, a member of the fourth generation of the renowned Sabanci family, since August 2011. However, they broke up in 2017.