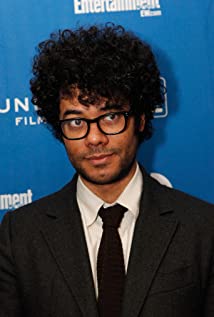 Richard Ellef Ayoade was born in Hammersmith, and grew up in Suffolk, in England, the son of a Norwegian mother, Dagny Amalie (Baassuik), and a Nigerian father, Layide Ade Laditi Ayoade. He studied Law at Cambridge university, and followed in the footsteps of British Comedy legends like Monty Python's Eric Idle, Hugh Laurie and Graeme Garden when he became the president of the Cambridge Footlights club.Ayoade's first real TV break was directing, co-writing and starring with Matthew Holness in the cult classic Garth Marenghi's Darkplace (2004) a parody of shlocky 1980's science fiction television shows, and noticed for it's "so bad it's good!" aesthetic. Notably shy and self-effacing in interviews, his performance as the debauched, self-assured publisher/pornographer/nightclub owner 'Dean Learner' showcased the young comedian's acting talent.After cameos in another cult series The Mighty Boosh (2003) as the shaman "Saboo", his position in the popular consciousness was cemented in the series The IT Crowd (2006) where Ayoade played the social oblivious, dweebish savant known as "Moss".All the while Ayoade continued to direct music videos for Vampire Weekend, Kasabian, and the Yeah, Yeah, Yeahs before finally getting his chance to direct a feature film, Submarine (2010), based on the novel by Joe Dunthorne.Submarine was followed by The Double (2013) co-written by Avi Korine and based on a novel by Fyodor Dostoevsky.

The Big Fat Quiz of the Year

The Big Fat Quiz of the Year