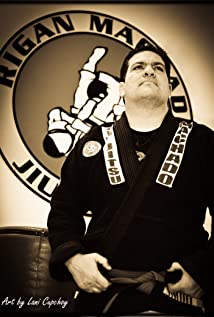 Rigan is one of five brothers of the Machado family. He began training at the age of 5 with his cousins, "The Gracie Family". In an interview, when asked about his exact relationship with the Gracies, Rigan said "My mother's sister married the founder of Brazilian Jiu-Jitsu, Carlos Gracie." Like all children he took it more as a game than really as something he wanted to do for the rest of his life. He started to take training and competing more seriously at the age of 14. This is the time where Rigan would start to train everyday. From the age of 14 through 21, he won the Brazilian National Championships every year and every belt division. He amassed a record of 365 wins and 2 losses in Brazilian Jiu-Jitsu competition. He also created a record by having 19 matches in one day and finishing all of them by submission. He remains unbeaten in Brazilian Jiu-Jitsu in more than 13 years of competition. His training sessions were all very technical and intensive under the eye of his two instructors Rolls Gracie and Carlos Gracie Jr.Rigan Machado was awarded the first black belt under Gracie Barra founder Carlos Gracie Jr. and is one of the original teachers who taught in the garage of Rorion Gracie in the early days of Brazilian Jiu Jitsu in America. He also trained with his other cousins such Rickson Gracie, Rorion Gracie, Rillion Gracie, his uncle Carlos Gracie Sr, and his brothers. He now has an 8th degree red and black belt in Brazilian Jiu-Jits.He is widely regarded as one of the top competitors in Brazilian Jiu Jitsu history. He also competed and won many tournaments in judo, Sambo, and wrestling. Rigan Machado teaches at his school, "The Academy Beverly Hills", located in Beverly Hills, California. Rigan is sponsored by a sporting goods brand called Sanabul and has an official Rigan Machado product line within the company. He is also the commissioner of Jiu Jitsu World League.

Fury of the Fist and the Golden Fleece