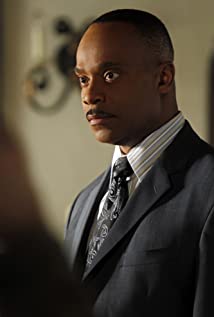 A classically-trained actor with a deeply-rooted seed in theatre, Rocky Carroll has solidified his career in cinema, stage and television with varied and impressive performances. Born in Cincinnati, Ohio, as Roscoe Carroll, he attended the prestigious School for Creative and Performing Arts, graduating in 1981 at age 18. Pursuing an interest to expand his knowledge in acting, he went on to attend The Conservatory of Theatre Arts at Webster University in St. Louis. For his efforts he earned a BFA. Finally he decided to move to New York to test his acting mettle and started out doing Shakespeare. He graduated to television work after proving himself on the stage, appearing in such series as Chicago Hope (1994), Law & Order (1990), The Game (2006), Boston Legal (2004) and The West Wing (1999). It could be said that his most notable and perhaps breakthrough role, however, came when he was cast as Assisant Director Leon Vance on NCIS (2003). It was a role that reunited him with his "Chicago Hope" cast mate Mark Harmon. His character Vance would later be promoted to Director of NCIS after the death of Director Jenny Shepard, played by Lauren Holly. In 2009, he appeared in a spin-off of the series, NCIS: Los Angeles (2009), joining the process of establishing the Los Angeles-based NCIS office.

Father of the Pride