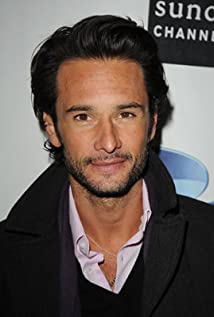 One of Brazil's most famous actors, Rodrigo Junqueira dos Reis Santoro was born in Petrópolis, Rio de Janeiro, Brazil, to Maria José Junqueira dos Reis, an artist, and Francesco Santoro, an engineer. His father is Italian, while his mother, who is Brazilian, has Portuguese ancestry.Santoro is known for his performance in Warner Bros. 300, based on the Frank Miller's graphic novel, which broke box office records throughout the world. Rodrigo starred as Xerxes, the Persian King who sent his massive army to conquer Greece in 480 B.C. He was nominated for an MTV Movie Award for Best Villain. Rodrigo has also gained attention for his role of Paulo in ABC's hit series Lost.In 2008, Santoro was featured in writer/director David Mamet's film Redbelt, the story of Mike Terry, a Jiu-jitsu master who has avoided the prize fighting circuit, instead choosing to pursue a life by operating a self-defense studio in Los Angeles. Also in 2008, Rodrigo was honored to receive the Ischia award for International Contribution at the 2008 Ischia Global Film Festival in Italy. In 2007, at the Cancun International Film Festival Rodrigo received a Best Actor award for his portrayal of an obsessive photographer in the Brazilian film "Nao por acaso" (Not By Chance).Santoro can be seen as Raul Castro, in Steve Soderbergh's film, Che. He can also be seen in Lion's Den by Pablo Trapero, which competed against Che at the Cannes Film Festival. In 2009, Rodrigo starred in Fox Searchlights' Post Grad along side Michael Keaton and Carol Burnett. You will also see Rodrigo in I Love You Phillip Morris with Jim Carrey and Ewan McGregor as Jim Carrey's first love.Rodrigo was part of the star-studded ensemble cast of Universal's romantic comedy Love Actually, starring alongside Hugh Grant, Emma Thompson, Colin Firth and Liam Neeson. In the role of Karl, he starred opposite Laura Linney as co-workers grappling with the dicey protocol of an office romance. Prior to this film, Rodrigo made his American debut in the highly sought after role of Randy Emmers in Charlie's Angels: Full Throttle, directed by McG, starring Cameron Diaz, Drew Barrymore and Lucy Liu.Rodrigo has also been seen starring as the "mystery man" opposite Nicole Kidman in the Baz Luhrmann directed commercial for Chanel.In 2004 Rodrigo's starred in the Brazilian film, Carandiru, directed by Hector Babenco, which broke all Brazilian box office records for Brazil's entry in the Foreign Film category for the Academy Awards. Carandiru premiered at the Cannes Film Festival where Rodrigo received the Chopard Award for Male Revelation of the year. For his role in Carandiru he was also nominated for the Cinema Brazil Grand Prize of Best Actor and won for Best Supporting Actor at the Cartagena Film Festival. The movie was distributed in the US by Sony Pictures Classics and was a groundbreaking portrayal of the largest penitentiary in Latin America, the Sao Paulo House of Detention, and the lives of the people in it. Dr. Dráuzio Varella based the movie on the best-selling book "Carandiru Station".Rodrigo has won a total of eight Best Actor awards, including the first ever award for Best Actor from the Brazilian Academy of Arts and Film, for his portrayal of a young man forced into a mental institution by his parents in Brainstorm, the critically acclaimed film by director Lais Bodansky.For Rodrigo's role in Bicho de Sete Cabecas (2001) he won five of his eight Best Actor awards including, Best Actor for the Brazilia Festival of Brazilian Cinema, Best Actor for the Cartagena Film Festival, Best Actor for Cinema Brazil Grand Prize, Best Actor for Recife Cinema Festival, and Best Actor for the Sao Paulo Association of Art Critics Awards.He has also been celebrated for his performance in the Miramax film Behind the Sun directed by Walter Salles (Central Station), in which he played Tonio, the middle son of a Brazilian family caught in the middle of an age-old family feud in 1910. He is forced by tradition and honor to kill a member of the neighboring family, positioning him next in line to be killed. The heart of the movie finds Tonio and his little brother discovering a world outside their family and home. Behind the Sun was nominated for a Golden Globe in 2002 for Best Foreign Language Film.Previous to that Rodrigo appeared opposite Helen Mirren, Olivier Martinez and Anne Bancroft in The Roman Spring of Mrs. Stone, directed by Robert Allan Ackerman, for Showtime. Based on the novella by Tennessee Williams, The Roman Spring of Mrs. Stone was nominated for five Emmy Awards in 2003.Rodrigo Santoro resides in Rio De Janeiro, Brazil.

Jane Got a Gun

Pele: Birth of a Legend