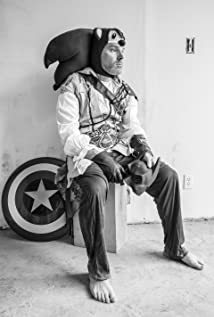 "You've heard Roger Craig Smith.Maybe you've not heard of him, but you've definitely heard this former stand-up comedian's voice in countless TV shows, video games, films and commercials.Roger Craig Smith is a man of a thousand voices. In just one production alone, Roger has voiced more than 170 characters for the Emmy award-winning Cartoon Network series Regular Show. Also on Cartoon Network, he voices "Sonic the Hedgehog" in the critically-lauded Sonic Boom, he's" Diamondhead" and "Steam Smythe" on Ben-10, "Percy" and "Belson" in Clarence, "Bob" in Powerpuff Girls, and numerous characters in Uncle Grandpa. On Disney XD's Avengers Assemble, Roger voices the legendary superhero "Captain America". He's the titular character "Mouse", as well as "Moose", for Amazon Prime Video's flagship children's series If You Give a Mouse a Cookie. Warner Bros. has Roger voicing two lead characters in Unikitty, based off the global success The Lego Movie. His legacy in anime is as the maniacal "Deidara" in Naruto and "Shinji Hirako" in Bleach. Roger provided the voice for "Sonic the Hedgehog" in Disney's blockbuster feature Wreck-It Ralph and was called on by Disney again to voice lead villain "Ripslinger" in Disney's Planes.Roger's influence in video games is extensive. As the voice of gaming icon "Ezio Auditore da Firenze" from Ubisoft's Assassin's Creed, more than 28 million video games have been sold worldwide. WB chose Roger to voice the legendary "Batman" in WB's Arkham Origins and Arkham Origins: Blackgate. Roger has been voicing "Sonic the Hedgehog" for SEGA since 2010 and earned early video game fandom when he voiced the hunky "Chris Redfield" in the Resident Evil series of games.Roger is the announcer/narrator for NBC's smash hit "World of Dance" and has narrated more than 1,000 episodes of other TV shows, including TLC's longest-running prime time series "Say Yes to the Dress" and DIY Network's "Crashers" series. He's voiced multiple promo campaigns for major broadcast television networks and is the imaging/promo voice for the world-famous KROQ 106.7FM in Los Angeles, CA. Multiple national retail campaigns utilize Roger to enhance their message to consumers across all mediums.Raised in SoCal since the age of one, Roger was voted "Class Clown" in 8th grade, but would eventually focus his creativity toward training in musical theater. He would speak at both his 8th and 12th grade graduations, was voted freshman class president in high school, hosted a broadcast TV talk show while earning his B.A.in Screenwriting at Chapman University, while also pursuing stand-up comedy. After working as a comedian professionally for 5 years, Roger was gaining notoriety as a voice actor, as well. In 2005, he left stand-up to pursue voice acting full-time. Roger knows he's got fans of all ages on social media, so he keeps his posts apolitical and family-friendly. He enjoys getting outdoors as often as possible to pursue his passion for nature, hiking/mountain biking, and nightscape/astrophotography, which he shares regularly with his followers on Instagram and Twitter."