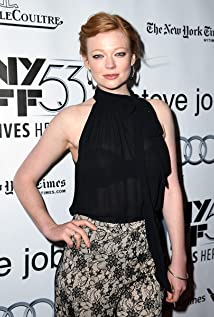 Sarah Snook was born and raised in Adelaide, South Australia. Showing promise in performing arts at a young age, Sarah was awarded a scholarship to study drama at Scotch College, Adelaide. After high school, she was accepted in to the prestigious National Institute of Dramatic Arts (NIDA) and graduated in 2008 with a Bachelor of Fine Arts (Acting).Having started out in theatre in Sydney, Sarah was the runner-up in the 2011 Australians in Film Heath Ledger Scholarship. She has since gone on to work extensively in film and television in Australia, receiving awards from the Australian Academy for Cinema and Television Arts (AACTA) for Best Actress in a Film, Predestination (2014), and Best Lead Actress in a Television Drama, Sisters of War (2010), the Film Critic's Circle of Australia (FCCA) for Best Actress - Lead Role, Predestination (2014) and Not Suitable for Children (2012), and the Australian Film Critics Association (AFCA) for Best Actress in a Supporting Role, These Final Hours (2013).Internationally, Sarah has acted in numerous films, most notably Steve Jobs (2015) and The Glass Castle (2017). She also appeared in the Netflix series Black Mirror (2011). On stage, Sarah made her West End debut in 2016 alongside Ralph Fiennes in The Old Vic's production of Henrik Ibsen's "The Master Builder".In 2017 Sarah wrapped on two Australian productions, Winchester (2018) and Brothers' Nest (2018), and was in New York later in 2017 to shoot the first season of HBO series, Succession (2018).